The hormone auxin is a key regulator of plant growth and development. But how it sets these processes in motion has been unclear. Scientists from the University of Würzburg have now uncovered central details.

Plants whose direction of growth is switched from vertical to horizontal in experiments have to reorient spatially. The hormone auxin plays an important role in this process. In wild type plants, for example, the root tip immediately starts to grow back in the direction of the gravitational stimulus – this is clearly visible already after six hours (upper plant, yellow arrow). A mutant in which the gene for the AUX1 auxin transporter is defective is not able to translate the gravitational stimulus into 'correct' growth. The root tip has no orientation (lower plant). (Photo: Dirk Becker)

Based on what we know today, the plant hormone auxin influences all aspects of plant growth and development. It makes corn thrive from germination to harvest, causes trees to grow skyward and date palms to produce sweet fruits. This makes auxin a significant driver of plant biomass creation on our planet. This is already suggested by its name which derives from Greek auxánō, meaning "I grow".

For this reason, researchers from the fields of agriculture and forestry have been trying to understand the workings of this growth hormone and harness their findings for scientific applications for ages. Even though the chemical structure of auxin was identified as early as in the 1930s, it is still not completely resolved how the hormone gets to its target cells and unfolds its effect there. On the quest to answer these questions, biophysicist Professor Rainer Hedrich and other Würzburg plant researchers have now achieved a major breakthrough. They present their results in the current issue of the scientific journal Nature Communications.

From a chemical point of view, auxin is a comparably simple substance. Called indole-3-acetic acid, or IAA for short, in technical language, it is a derivative of tryptophan, an aromatic amino acid. Plants produce the hormone in the shoot apex, for example, and subsequently forward it to the target cells, including the root cells.

"For our latest study, we scrutinized the root hair cells whose development based on polar cell growth depends on the import of auxin," Rainer Hedrich describes the initial situation of the Würzburg team. Julian Dindas, a PhD student at Hedrich's department, used microelectrodes that register the electric voltage of the root hair's cell membrane, the so-called membrane potential, to study the early responses of the cell to a hormone pulse.

Assistance from Freiburg and Nottingham

He found that the membrane potential depolarized depending on the IAA concentration and the duration of the application. This means that the negatively charged indole acetic acid triggered a process which causes positively charged ions to get into the inside of the cell. This process was more pronounced the more positive ions were present on the outside of the cell. "This suggested that the negatively charged indole acetic acid hormone molecule is absorbed into the root hair cell together with an excess amount of positive ions," Hedrich says.

This measurement result automatically raised the next question: Which transporter in the cell membrane is responsible for this? This questions was quickly answered after consulting with the auxin geneticists Professor Klaus Palme from Freiburg and Professor Malcolm Bennett from Nottingham: "From a collection of mutants of the model plant Arabidopsis with an atypical response to the administration of auxin, one special mutant did not exhibit any IAA-mediated root hair depolarization," Hedrich recalls.

A new signal pathway for an 'old' hormone

Additionally, this mutant did not show a temporary increase of the cellular calcium level either, as can normally be observed after IAA-induced depolarization. "This was the proof that the root hair response to auxin is complex and possibly the result of a signal chain," the plant scientist explains.

In fact, the study of additional auxin mutants suggested that both a special receptor complex and a calcium channel were involved. If one component was missing in this triplet consisting of auxin transporter, receptor or calcium channel, there was no cellular response. "We concluded that IAA in the cell prompts the receptor to open the calcium channel, thereby instructing the cell to adjust cell division and elongation to the hormone signal," Hedrich explains.

A signal crosses the root

By micro-injecting IAA directly into the root hair, Julian Dindas also demonstrated that an auxin-treated cell does more than send a calcium signal. Rather, it sets a self-amplifying calcium wave in motion. Examination under a fluorescence microscope revealed that this calcium wave reaches the root tip already within a few minutes.

Not only the root's stem-cell niche is located there, the root tip also accommodates sensors for an auxin-dependent growth of the plant based on gravitation. This becomes evident when looking at wind-thrown trees. "Over time, the trees manage to take root in the soil again and re-straighten the shoot," says Hedrich. This is what makes the matter particularly exciting for the scientists, because "this control centre decides about the fate of differentiating cells and thus about the fate of the root architecture."

Scientists know that different auxin concentrations in cells and their environment assume a key role in these differentiation processes. Previously, however, this aspect was examined more against the background of the hormone's gene regulation impact according to the Würzburg plant scientists. The physiological role of the auxin signal pathway in the call membrane in contrast had been largely unknown.

"Our studies suggest that the local auxin signals can be communicated over long distances using calcium waves in order to generate an auxin signal also in target cells located far away," Hedrich says.  Further experiments are planned to determine how this is achieved at the molecular level and how the proteins of the "auxin signalosome" identified by the Würzburg researchers intervene with this scenario.

Prof. Dr. Rainer Hedrich, Department of Molecular Plant-Physiology and Biophysics - Botany I, Biocenter of the University of Würzburg, T: +49 931 31-86100, hedrich@botanik.uni-wuerzburg.de 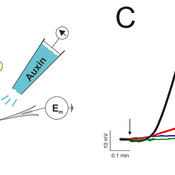