Oleksii Balagurin, the project-leader of SONATE, is working with the satellite. (Image: Hakan Kayal / Universität Würzburg)

Though only about the size of a shoebox, it is the biggest and most complex satellite ever built in Bavaria: The latest cube sat of the University of Würzburg was successfully launched into space on Friday, 5 July. It took off from Vostochny Cosmodrome at 7:41 as secondary payload of a Soyuz-rocket and has been active in an orbit around Earth at a height of about 530 kilometres since Friday 12:02.

The satellite named SONATE (Solutus Nana Satellite) is about 31 centimetres long, weighs 4.2 kilogrammes and is equipped among others with nine powerful on-board computers to assure autonomy and safe operation. Most of the satellite's systems are redundant, which means they are duplicate, as is standard in aerospace engineering. Operated from the mission control centre in Würzburg, the nanosatellite will now be used to test the latest technology developed at the University of Würzburg. SONATE is the brainchild of Hakan Kayal, a Professor of Space Technology at the University of Würzburg, and Oleksii Balagurin, his project manager. "The mission of SONATE is to test new technologies to boost the autonomy of nanosatellites under real space conditions," Kayal explains.

Technology made in Würzburg

A smart camera (ASAP-L) developed at the University of Würzburg is the key payload carried by the satellite. Its function is to detect transient luminous events in the upper atmosphere and in near-Earth space. This includes meteors or space debris which burn up in the atmosphere or so-called sprites and blue jets, which are spectacular flashes that shoot upwards up to 100 kilometres towards space. An upcoming software update will enable the camera to decide autonomously whether to photograph such phenomena just once or whether to track them and take multiple shots.

The second main payload (ADIA-L) of SONATE is a new autonomous diagnostic system for satellites which is capable of detecting on-board failures independently to save valuable time for corrective actions on the ground. The satellite accommodates more technology engineered at the University of Würzburg, such as novel star sensors capable of determining the satellite's position in space with high precision. Other on-board features include new, miniature reaction wheels for in-space attitude control and an amateur radio transmitter.

Professor Alfred Forchel, the President of the University of Würzburg, congratulated the team of researchers and technicians on the successful launch: "Innovation and cutting-edge technology are hallmarks of our university. Therefore, I am excited that SONATE has made the leap into space. The launch of SONATE is a huge success for our university and I would like to thank Professor Kayal and everyone involved for their outstanding performance."

The successful satellite launch is the fruit of three years of construction activities and preparations. Numerous employees, assistants and students from bachelor and master's programmes contributed to designing and building SONATE and its payloads.

Since the launch party on Friday morning, SONATE mission control on Hubland North Campus in Würzburg has been working 24/7. One command operator and several payload specialists monitor and operate the satellite and its equipment. The data are received, analysed and archived by two ground stations on campus. The next days will be all about surviving the first tests. "This phase of high activity will abate only after a few months," says Kayal, the aerospace engineer from Würzburg.

"Autonomous nanosatellites such as SONATE are of great importance especially for interplanetary missions," Kayal explains. Until a signal from Earth reaches a satellite orbiting Mars, for example, it could be too late in certain situations. So we wanted to enhance the autonomy. The researchers hope to glean relevant experiences for future interplanetary missions.

The current SONATE mission is scheduled to run for a year. But the satellite will continue to orbit Earth after this time and help teach students at the university. The "aerospace operations" course will give students the opportunity to directly interact with the satellite and learn how to control satellites, receive and collect data.

Exolaunch, a German launch service provider for small satellites and separation systems, was in charge of mission management and integrating SONATE with the rocket. SONATE is supported by the Space Agency of the German Aerospace Center (DLR) with EUR 1.3 million of funding provided by the Federal Ministry of Economic Affairs and Energy (BMWi) based on a resolution of the German Bundestag (50RM1606). The individual payloads on board are funded separately. 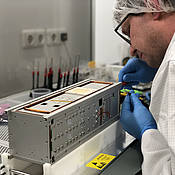 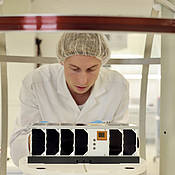 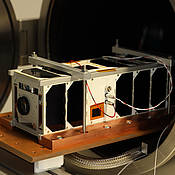 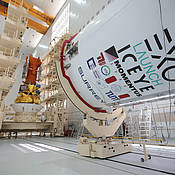 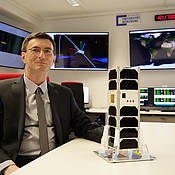 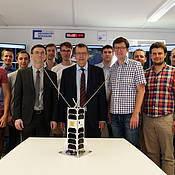