On the Way to Quantum Sensors

The Free State of Bavaria is funding a new research project on quantum sensors with three million euros. Among other things, it aims to further improve molecular and medical imaging. 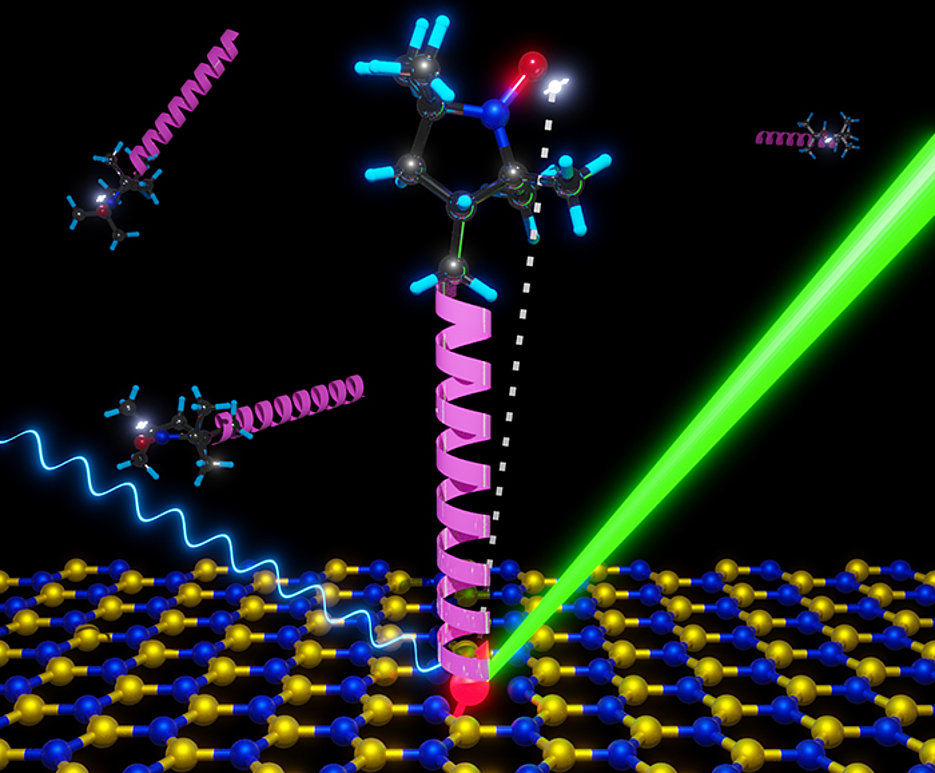 Schematic of a quantum sensor in which a biomolecule (pink) is anchored to a surface of hexagonal boron nitride on which the spin defect (red) is located. The latter operates as a sensitive probe for the environment. (Image: Andreas Gottscholl / Universität Würzburg)

The new research project IQ-Sense - Integrated Spin Systems for Quantum Sensors aims to measure physical quantities such as temperature, pressure, magnetic or electric fields with unprecedented precision. Such measurements using quantum sensors are of fundamental importance in the natural and engineering sciences, but also in the life sciences and medicine.

The project brings together research groups from Julius-Maximilians-Universität Würzburg (JMU) and Technische Universität München (TUM), both in Bavaria, Germany. The complementary expertise represented in the project includes physics, chemistry, life sciences and medicine.

On the one hand, the synergistically linked groups from the two universities aim to explore the fundamentals of advanced quantum sensor technology using several identified solid-state platforms. On the other hand, they are going to develop and demonstrate integrated quantum sensors for spectroscopic and imaging applications in biomolecular and biomedical settings.

The project is coordinated by the Würzburg Professor Vladimir Dyakonov, head of the JMU Chair of Experimental Physics 6. Other JMU participants come from the Institute of Physics, the Biocentre and the Rudolf Virchow Centre for Integrative and Translational Imaging.

The Bavarian State Ministry of Science and the Arts is funding IQ-Sense as part of the initiative "Lighthouse Projects for Research, Development and Applications in Quantum Sciences and Quantum Technologies". Around three million euros have been approved for the project over three years. Half of the sum will go to Würzburg.

Minister of Science Markus Blume: "We want to specifically support interdisciplinary and cross-university projects that can lay the foundations for groundbreaking innovations. Innovations that we can't even imagine exist today."

As part of this Bavarian funding initiative, JMU will also receive a new quantum professorship for Computational Quantum Materials. The Ministry already announced this in June 2022; the appointment procedure for the professorship is underway. The new professorship was applied for by JMU physics professors Björn Trauzettel and Ralph Claessen.

The Free State is funding the establishment of the new professorship at JMU with around 1.5 million euros over five years.

Both successful applications will strengthen the Würzburg-Dresden Cluster of Excellence "ct.qmat - Complexity and Topology in Quantum Matter".