Increased cell proliferation is a key feature of diseases such as cancer. A research team from the University of Würzburg and two Leibniz Institutes has now succeeded in indirectly influencing this process. 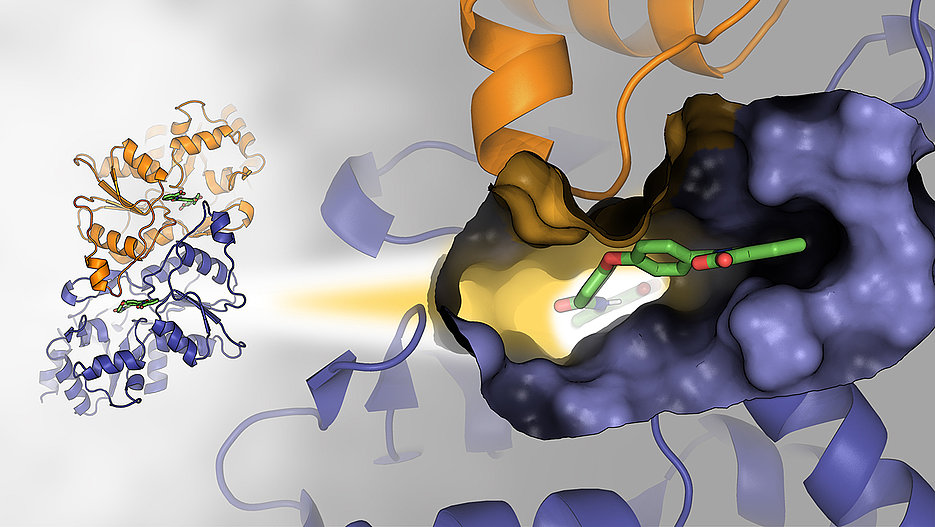 Dimeric structure of phosphoglycolate phosphatase. The enlarged section on the right shows the ligand-binding pocket in complex with the small molecule inhibitor CP1. (Image: Natalia Yuan-Chen)

As differently as cancers or autoimmune diseases such as multiple sclerosis, rheumatoid arthritis or psoriasis affect people – they all have one characteristic in common: they are accompanied by increased cell proliferation. Accordingly, the diseased cells must vigorously increase their production of molecular building blocks, which is inevitably linked to greatly increased energy demands.

Therefore, control over the cellular production of building blocks for macromolecule synthesis and energy homeostasis is an important strategy in the development of new drugs against such diseases. A team of scientists at the Julius-Maximilians-Universität Würzburg (JMU) has now succeeded in taking an important step in this direction. Using a previously unexploited pharmacological target, they were able to influence these cellular processes.

The lead author of the study, which has now been published in the journal Nature Communications, is Antje Gohla, Professor of Biochemical Pharmacology at JMU's Department of Pharmacology and Toxicology. Teams from the Rudolf Virchow Center (RVZ) for Integrative and Translational Imaging, the Biocenter and the Institute of Pharmacy at JMU, as well as the Leibniz Institute for Molecular Pharmacology-FMP Berlin and the Leibniz Institute for Analytical Sciences-ISAS Dortmund were also involved in this work.

"A typical target for the development of new drugs is the preference of many cells for sugar in the form of glucose as one of the main energy and building block suppliers, because glucose is a versatile, quasi-all-purpose molecule in metabolism," explains Antje Gohla. However, the therapeutic success of this strategy has been limited so far.

An important aspect of human metabolism has been ignored by researchers for a long time: "In parallel to the well-known glucose breakdown and conversion pathways, numerous 'repair processes' run in the background, and these processes are critical for a smoothly operating metabolism," Gohla explains.

The research team focused on these processes in its study. Specifically, the scientists investigated the question of whether such repair processes could be suitable as drug targets. The answer is clear: "For the first time, we were able to identify a compound that selectively inhibits the activity of the so-called phosphoglycolate phosphatase, an important repair enzyme in sugar metabolism," explains the pharmacologist. In the test tube, the compound indeed blocks the proliferation of tumor cells.

Phosphatases are generally regarded as challenging pharmacological targets. The team is therefore particularly pleased to have succeeded in identifying and characterizing a structurally novel phosphatase inhibitor.

Gohla received support in this search from experts in high-throughput screening, metabolomics, structural biology and medicinal chemistry. With their help, she said, it was possible to elucidate the molecular mechanism of action of an inhibitor of phosphoglycolate phosphatase in detail.

Professor Hermann Schindelin of the Rudolf Virchow Center made a significant contribution by elucidating the three-dimensional structure of phosphoglycolate phosphatase in complex with the inhibitor using X-ray crystal structure analysis. "The visualization of the drug in spatial proximity to the active site not only explains the enzyme’s kinetic data, but above all provides a starting point for the future development of a new generation of inhibitors with improved binding properties," the structural biologist explains.

Overall, the results show that there are still untapped pharmacological targets in cellular sugar metabolism. While research has so far focused on the main glucose metabolic pathways, which are also vital for many healthy cells, this new approach targets the increased need of disease-associated cells for repair processes. "The concept is to pharmacologically target the increased requirement of tumor cells or misguided immune cells for metabolic repair processes, such that these cells poison themselves by accumulating toxic metabolic byproducts" Gohla explains.

However, there is still a long way to go before such compounds may be used as drugs. The authors of the study nevertheless hope that, on the basis of their fundamental findings, new perspectives will open up in the future for the treatment of tumors, autoimmune diseases or chronic inflammatory conditions.