A protein with two faces

Molecular biologist Elmar Wolf is interested in proteins which are responsible for the uncontrolled growth of many tumour types. Now the German Research Foundation (Deutsche Forschungsgemeinschaft - DFG) has approved a new Emmy Noether Junior Research Group. 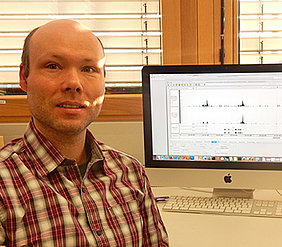 Dr. Elmar Wolf at his desk in the University of Würzburg's Biocenter. (Photo: Anneli Gebhardt-Wolf)

As so often in life, it is the correct dose that matters: Insufficient production of a certain protein will impede growth and prevent the organism from maintaining its functions. But when cells produce too much of the protein, they will degrade and form tumour tissue. We are talking about Myc, the key protein in the complex circuitry of cell growth.

€1.2 million for his own research group

Dr. Elmar Wolf, a research associate at the Department of Biochemistry and Molecular Biology at the University of Würzburg, focuses on studying Myc. And he will be able to continue doing so in the future thanks to Deutsche Forschungsgemeinschaft (DFG) that has approved Wolf's application to set up an Emmy Noether Junior Research Group. The €1.2 million grant will enable the human biologist to study the protein thoroughly within the next five years with his own team.

"We now know that in the majority of all tumours in humans, the MYC gene has been modified to be overexpressed," Elmar Wolf explains. As a consequence, tumour cells produce too many Myc proteins which then boost the metabolism and cause uncontrolled cell growth.

How this works has also been studied in detail: "Myc binds to the genetic material in the cell nucleus and selectively activates genes there," Wolf further. But if the proteins in tumour cells are "overdosed", they regulate totally different genes than in healthy cells, leading to the well-known disastrous consequences. So far, scientists have identified several hundred genes that are activated by Myc proteins in tumour cells. In fact, however, the proteins bind to tens of thousands of genes.

Myc: A target for new therapies?

So if Myc proteins are responsible for the majority of human tumours, doesn't this make them an ideal target for new therapies? "That is very difficult. After all, they are vital for the body when they function normally," Elmar Wolf says. A possible approach has been demonstrated recently by Wolf and Professor Martin Eilers, head of the Department for Biochemistry and Molecular Biology, in a study conducted in cooperation with St. Jude Children's Research Hospital (Memphis, USA). The two scientists published their results in the scientific journal Cancer Cell at the end of 2015.

"We looked at a certain type of cerebellar tumours – so-called medulloblastoma, the most common malignant childhood brain tumour. The scientist wanted to find out why four subtypes of this tumour differ considerably with regard to their aggressiveness. They found that in one subtype associated with the worst prognosis, the Myc proteins form a complex with Miz1, another protein.

When they inhibited binding of the two proteins, the laboratory mice had much better chances of survival. Because the interaction of Myc and Miz1 proteins is not necessary in the normal organism, this might present a target for a new therapy of aggressive tumours. "This strategy might allow us to separate the physiologically essential function of Myc from the undesired oncogenic one," Wolf hopes.

Finding a therapy for cancer is, however, not the main goal of Elmar Wolf's Emmy Noether Junior Research Group. "I want to understand the Myc protein better at the molecular level," he says. The question of how Myc regulates the normal growth of cells has top priority for him in this context. According to Wolf, the number of ribosomes inside the cell is decisive for cell growth. They are a sort of "protein factories" of cells, decoding the stored genetic information to make proteins. In order to produce ribosomes, the cells need three so-called RNA polymerases – machines that transcribe the genome and produce precursors of the proteins.

"Myc controls the activity of these three polymerases. I want to understand how that works," Wolf describes the purpose of his work. How does Myc bind to the polymerases and how does it control their activity? How does it cause growth in this way?" are but a few questions the scientist hopes to answer in the next years. When asked whether all this can be achieved in the five years funded by the DFG, he replies: "We won't accomplish everything in that time, but on the whole, my goals are realistic."

Elmar Wolf (36) studied human biology at the University of Marburg from 2000 to 2005. He submitted his doctoral thesis at the Max Planck Institute for Biophysical Chemistry in Göttingen in 2010. Its title: "Elektronenmikroskopische Lokalisierung funktioneller Zentren am isolierten Spleißosom" (electron-microscopic localisation of functional centres at isolated spliceosomes). Since July 2010, Wolf has been researching at the Department for Biochemistry and Molecular Biology at the University of Würzburg as a postdoc. He is married and has two children.

The Emmy Noether Programme supports researchers in achieving independence at an early stage of their scientific careers. Postdocs gain the qualifications required for a university teaching career during a DFG-funded period, usually lasting five years, in which they lead their own independent junior research group. As a rule, researchers who have acquired between two and four years of postdoctoral research experience are eligible to apply.