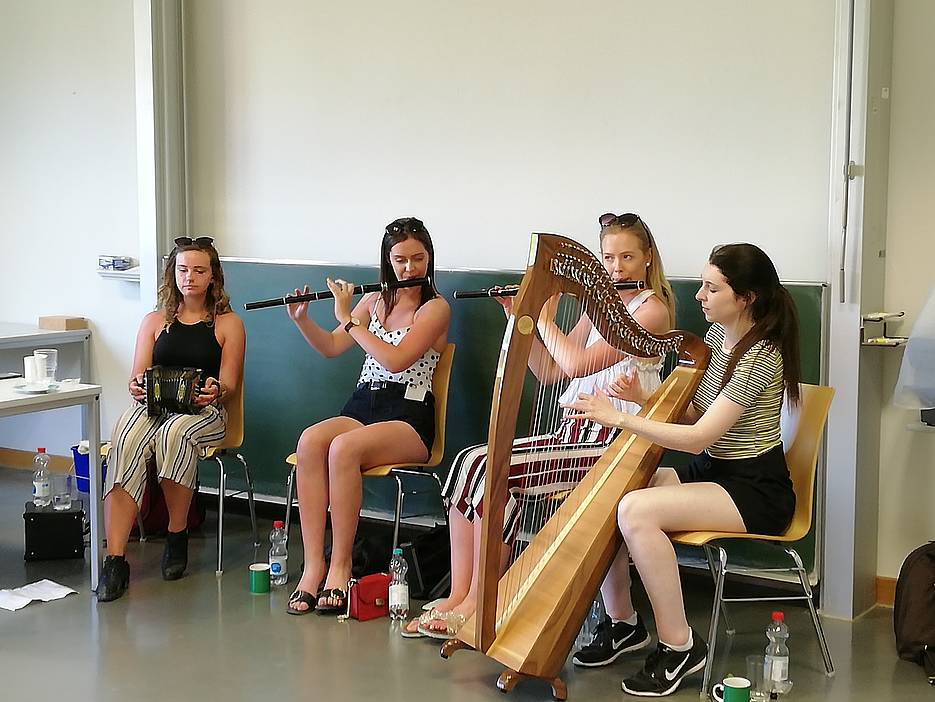 Music and dance – the Irish way

On the 8th of May 2018, Emma Phelan sent her students of the summer C1 Intercultural Training class a message around noon: “We have some special guests coming to us in the course today.”

Then, later in class we were surprised by four young Irish women. They brought with them two transverse flutes, a concertina and a harp. They are students of music and teaching based in Ireland and had a gig just a few hours before at the newly opened Landesgartenschau located beside the Zentrum für Sprachen. Luckily they were able to share some time with us.

After a brief introductory announcement, our guests jumped right into it. The musicians are 18 to 24 years and three of them are studying at the same college in Ireland. Each one told us about themselves and then started with the music. After each tune they gave us some insights into Irish music and traditions.

The harp provided the harmonic and rythmical foundation; while on this basis the two flutes and the concertina spun their melodies over it in intricate unisono lines or more often in lines of parallel thirds. (For those unfamiliar with a concertina, please picture a tiny cute version of an accordion). All was played very accurately and from memory, while they tapped along to the quarter notes audibly with their feet. For the last tune the concertina-player stepdanced, while the trio continued to play the music. Her topnotch Irish stepdancing – which contained many demisemiquavers – fitted perfectly into the music.

After the music there was an elaborate questions & answers session, e.g. the true meaning of “lilting“ was explained and consequently performed to us. Furthermore, a low-key cultural stereotype, namely, that “everyone in Ireland can play an instrument” was debunked. However, the appreciation of live music appears to be quite deeply inscribed into people who grow up in Ireland.

The whole event ended in a relaxed Irish group dance lesson, which some of the students were not entirely able to successfully cope with – the author of this review included. But it was great fun for sure!