Bark beetles are currently responsible for killing an unprecedented number of trees in forests across Europe and North America. Researchers are therefore urging to step up research into bark beetles – also in view of climate change.

"Bark beetles lay waste to forests" – "Climate change sends beetles into overdrive" – "Bark beetles: can the spruce be saved?": These newspaper headlines of the past weeks covered the explosive growth of bark beetle populations and its devastating impact on timberlands. The problem is not limited to Germany. A comparable situation is encountered in many forests across Central Europe and North America. The consequences of this major infestation are massive: In 2018, the beetles were responsible for ruining around 40 million cubic metres of wood just in Central Europe.

Mass outbreaks of bark beetles usually last a couple of months to years and are followed by sudden declines in the beetle populations. Little is known about this natural phenomenon. In the current issue of the scientific journal Trends in Ecology and Evolution, researchers are therefore calling to step up research into the life cycle of the harmful insects. "We have taken a number of elaborate measures to protect our forests against bark beetles. But we still know very little about what triggers the variations in bark beetle populations," says Peter Biedermann, the lead author of the recently published study.

Biedermann is a researcher at the Department of Animal Ecology and Tropical Biology of the University of Würzburg. Together with colleagues from the Max Planck Institute for Chemical Ecology in Jena and the Bavarian Forest National Park, who contributed to the study, he therefore demands: "It is an urgency to create the scientific foundation now to enable forestry officials and politicians to respond more efficiently to bark beetle outbreaks in the future." The results from these studies could serve as blueprints to fight other harmful insect pests plaguing forests. According to Biedermann, the most important question is whether it might be a practicable approach in natural forests or timberlands to just do nothing in the event of a population boom of insect pests. Scientists in the Bavarian Forest National Park have observed that bark beetle populations collapsed after a few years when no counter-measures were taken.

The scientists believe that more needs to be known about the life cycle particularly of the spruce bark beetle also in view of the climate crisis. "The expected increases in the frequency and intensity of extreme weather events will additionally weaken German timberlands. Therefore, we will have to be prepared to tackle growing problems with the spruce bark beetle," says Jörg Müller, a professor at the Department of Animal Ecology and Tropical Biology at the University of Würzburg and Deputy Manager of the Bavarian Forest National Park.

Higher temperatures and intensifying summer droughts put trees and especially spruces under great pressure. Spruces are originally from mountain regions and it was only when they were widely planted out of economic interest that the conifer species also populated lower elevations. Spruces are not very resistant to heat and drought. Long-term water shortage weakens the tree's defences against the bark beetle – chemical substances that harm the beetles and increased resin release which clogs up the beetle tunnels.

There are countless factors that influence the population size of insects such as the bark beetle. Natural enemies, pathogens, interspecific and intraspecific competition, landscape structures, tree population, resilience of the preferred host, temperature and precipitation. According to Jörg Müller, it is largely unknown which role each factor plays in the population dynamics of forest insects.

To remedy this lack of knowledge, the scientists suggest pooling the worldwide data, identifying knowledge gaps on the population dynamics of spruce bark beetles and other forest insects and using this as the basis to answer key questions on the interaction of various factors through new data surveys. In a second step, the insights gleaned from the results will be tested during experimental field studies to derive recommendations for action.

The scientists believe that support from forestry officials and public bodies as well as funding are essential. In their view, this support is necessary to achieve the ambitious goal of shedding light on the population development of bark beetles and other forest insects. This new approach could contribute to initiating efficient pest control management in forests. 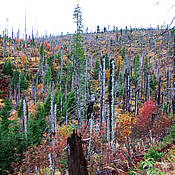