(Not only) the wind shows the way

When the South African dung beetle rolls its dung ball through the savannah, it must know the way as precisely as possible. Scientists have now discovered that it does not orient itself solely on the position of the sun. 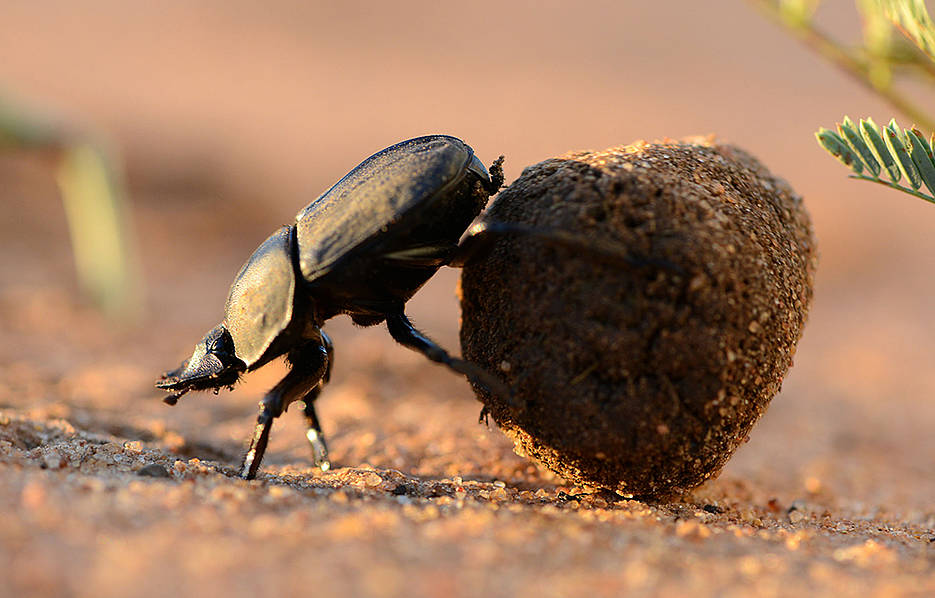 The South African dung beetle Scarabaeus lamarcki has - to put it mildly - an interesting technique to ensure its offspring a good start in life. When the animal, which is only a few centimetres tall, encounters elephant dung, for example, it forms small balls out of it which it then rolls away in a randomly chosen direction. After a while, the beetle stuffs the dung into underground passages, which serve as its breeding chamber; where it then lays its eggs.

How the dung beetle finds its way from the elephant dung pile to the underground passages: This is what Dr. Basil el Jundi is interested in. The neurobiologist heads an Emmy Noether Junior Research Group at the Biocentre of Julius-Maximilians-Universität Würzburg (JMU) in Bavaria, Germany, and investigates the navigational ability of insects.

Together with scientists from Sweden and South Africa, he has now discovered that the dung beetle – contrary to previous assumptions – does not only orient itself on the position of the sun when navigating, but also includes information about wind direction in its route planning. The researchers have published their new findings in the current issue of the journal PNAS – Proceedings of the National Academy of Sciences.

On a straight line away from the dung heap

“South African dung beetles must roll their dung ball away from the dung pile as quickly as possible to prevent the ball from being stolen by other beetles”, explains el Jundi. To ensure that they actually get out of the dangerous area as quickly as possible, the beetles roll the ball away from the dung pile along a straight line. In order to keep their course, they use celestial cues as orientation references - for example, the position of the sun. However, it was not yet clear how the beetles find their way when the sun provides no useful information, for example when it is noon.

Basil el Jundi and his team can now answer this question: "We have discovered that dung beetles use the wind for orientation in addition to the sky.” The animals perceive the corresponding signals via their antennae. The necessary information is provided by high wind speeds, which occur in the African savannah especially around noon, when orientation by the sun becomes difficult.

The combination of the systems increases precision

However, to produce an efficient and robust "compass", the animals must combine and harmonize the wind information with the other celestial signals. This is the only way to ensure that they find their way, even in a sudden calm, by flexibly switching back to the solar compass as the main orientation signal. As the researchers were able to show, this combination of different orientation systems not only makes it easier for the beetle to find its way, but it also increases the precision of the beetle compass.

For their study, the scientists worked within a laboratory arena in which they were able to simulate and control the position of the sun and the wind direction to precisely record their effects on beetle navigation. Their experiments not only show that the beetles set the wind directional information relative to the position of the sun. “We could also show that the beetles were able to transfer the directional information, which they have set with the sun as their only reference, to the wind compass,” says el Jundi. This shows that both the wind compass and the solar compass in the beetle brain "access" the same spatial memory network and therefore communicate with each other.

Thus, the recently published study shows that dung beetles use a much more dynamic compass than science has previously thought possible. The access to different sensory modalities enables the animals to navigate at any time with highest precision. Their abilities clearly exceed human abilities - even though they are equipped with a brain that is smaller than a grain of rice. In addition, the results confirm that an insect brain is not a "static substrate", but a piece of a "highly plastic neuronal machinery that can adapt to its environment in a perfect way”, as the scientists write.