Of “Dead Stones” and Lived Memory

Drawing a line from the Jewish cemetery in Würzburg to Yom Hashoah in Dayton, Ohio

“True memory”, writes Kirk Savage of the beliefs of nineteenth-century American sceptics of a public national monument in his book, Monument Wars, “lay not in a heap of dead stones but in the hearts and minds of the people; no monument could substitute for living social memory, nourished by liberty and education.” A cultural belief in the superiority of lived and living memory over the “dead stones” of public monuments was – and still is – widespread. Yet it disregards the potentially vital role as reminders or emblems that physical monuments and memorials can play in the lived memory and memory culture of social groups, that is, “in the hearts and minds of the people.”

Part of an online exhibition at the University of Würzburg, Germany, these videocasts will initially focus on the Jewish cemetery in Würzburg, where we aim to bring “dead stones” and “living social memory” into conversation. In the Jewish cemetery in Würzburg, we take “dead stones” as a metaphor for three distinctly interconnected things: firstly, the gravestones themselves; secondly, the Shoah monument on the graveyard; thirdly, the stones that are customarily placed on the graves of Jews when they are visited. We will follow these instances of memory-made-stone through the graveyard in part one, trace the personal history and lived memory of a holocaust survivor, Eva Steinberger Clair in part two, and then present and discuss an exemplary case of shared memory in her community, the Yom HaShoah Observance in Greater Dayton, Ohio, in part three.

The picture was taken at the Würzburg Jewish Cemetery and shows several rows of gravestones, most of them identical, rather small and made of concrete.

They look plain and stick out of the green grass. 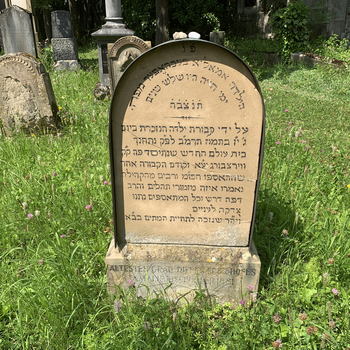 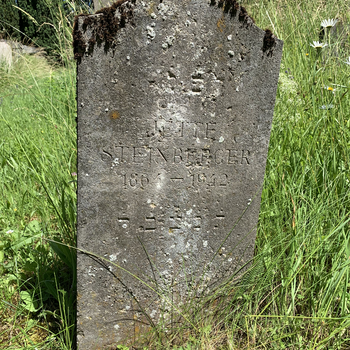 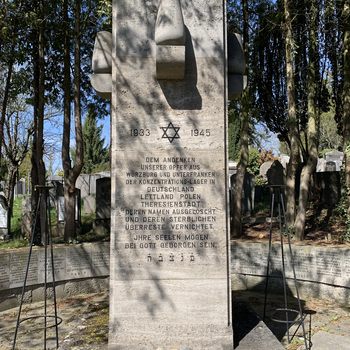 The picture shows the oldest gravestone in the cemetery. It is about 60 cm high, of ochre colour and has a Hebrew inscription.

Below is written in German "Oldest gravestone of this cemetery, Amalie Bechhöfer 1881" (The date should be corrected to 1882)".

This picture shows one of the small concrete gravestones, the gravestone of Jette Steinberger, born 1864 and died 1942.

The top of the stone is overgrown with dark moss.

The picture shows a photograph of the Holocaust Monument in the Jewish Cemetery in Würzburg.

The Monument is 4 metres high, in the shape of gravestone with the typical Hebrew engraving at the bottom.

In the centre, it bears an inscription honouring the Jewish victims of the Shoah that came from Würzburg and Lower Franconia. 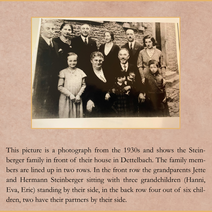 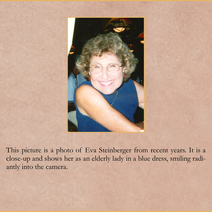 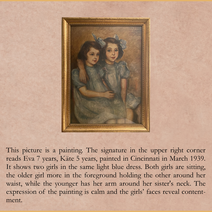 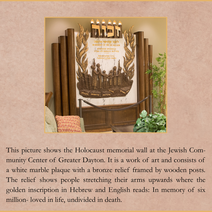 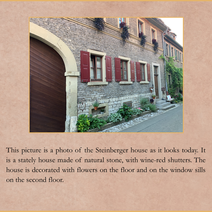