In August 2022, the seventh Working Paper "Local Self-Organization and the Third Sector: Between the Philanthropic and the Associative Approaches" edited by João Pedro Schmidt was published. 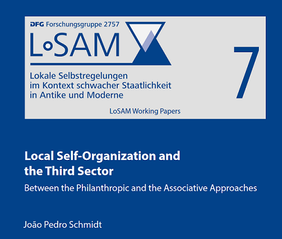 Civil society organizations only started to be considered a sector in the 1970s in the United States. Amitai Etzioni pioneered the use of the expression third sector, which became common in academic and political literature. However, in the United States, the non-profit sector concept gradually became more robust and was spread internationally based on the studies conducted by Lester Salomon and associated researchers.

The theory built on the concept of the non-profit sector is strongly related to the North American cultural context, marked by the tradition of philanthropy and volunteerism, but with little importance given to associative and cooperative organizations. The non-profit sector is implicitly or explicitly conceived as part of the private sphere. In contrast, theoretical currents such as liberal communitarianism, the theories of cooperation, common goods, social capital, European social economy, and the Latin American solidarity economy highlight the primacy of cooperation in solving collective problems. These theories underpin the associative approach of the third sector and link it to the community, not to the market.

This paper argues that the associative approach is more appropriate for international studies on the third sector and the relevance of self-organization. The third sector, i.e., the set of organizations created and maintained by civil society, is the inheritor of the millennial associative tradition, including both entities whose values are compatible with the common good and those with particularistic values, authoritarian and contrary to human rights. The third sector is not entirely virtuous, but it is a vital sector for solving great human problems.

You can find more information here.