The resolution of a molecular orchestra

Researchers at the University of Würzburg develop the "photoswitching fingerprint analysis". A unique technology that for the first time allows the analysis of molecular processes and the regulation of individual proteins in living cells with sub-10 nm spatial resolution. The application ranges from biological to medical research and has been published in the renowned journal Nature Methods. 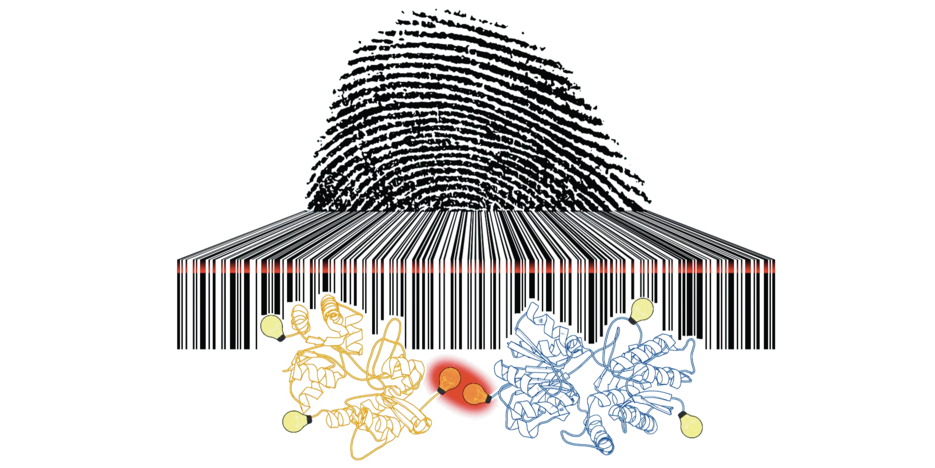 Image: The photoswitching rates of fluorescent dyes are as unique as a fingerprint and as readable as a barcode./ Beliu, Rudolf Virchow Center

Super-resolution microscopy allows fluorescence images of cells, organelles and molecular complexes to be acquired with unprecedented spatial resolution. However, this resolution is not sufficient to resolve proteins as small as a few nanometers and their interactions with other molecules or the architecture of protein complexes. It prevents, for example, the study of the molecular interplay of neurons in learning and memory processes.

Developed by the research group of Prof Markus Sauer (Rudolf Virchow Center and Biocenter) and Dr Gerti Beliu (Rudolf Virchow Center) at the University of Würzburg, the new photoswitching fingerprint analysis enables the optical imaging of dynamic interactions with other molecules in the cell. "Until now, no method exists that reliably allows structural optical resolution in cells in the sub-10 nm range. By elucidating this barrier underlying cause, we have succeeded for the first time, in combination with new direct labeling methods, to enable a cellular resolution of a few nanometers. This progress enables the revelation of molecular functions and the architecture of important components of our cells," Sauer reports.

Single-molecule localization microscopy methods such as dSTORM, developed in the group of Prof Markus Sauer, allow resolutions in the range of 10-20 nm. In combination with structured illumination methods, localization accuracies of up to 1 nm could be achieved for dyes. Unfortunately, this high localization precision could not be translated into a spatial resolution of a few nanometers in cells.

The problem: current labeling methods, for example immunostaining with an antibody, cause a spacing error of more than 10 nm. As a result, the size of the labeling molecules prevents nanometer-scale resolution. The other causes of the sub-10 nm resolution barrier were previously unknown. "In our publication, we have now shown for the first time that the photoswitching rates (blinking) of dyes between an on and off state are strongly affected at distances below 10 nm due to various energy transfer processes between dyes. This results in a cluster of on-states during the first seconds of an experiment associated with rapid photobleaching of the dyes, which makes their individual localization more difficult," Sauer explains. "The reduced localization probability of the dyes therefore results in a poorer structural resolution than one would expect based on the individual localization precision. This is similar to an orchestra when all instruments play their contributions simultaneously at the beginning of the piece; it is impossible to pick out the individual sound tracks."

However, the photoswitching fingerprint and the fluorescence decay time also contain information about the number of dyes present and, due to the distance dependence of energy transfer, also information about their distances without being able to resolve the individual dyes optically. By incorporating unnatural amino acids into multimeric membrane receptors through genetic code expansion followed by bioorthogonal click labeling with small fluorescent dyes, the Würzburg research groups were now able to show in the next step how specific site-specific labeling of proteins in cells can be achieved without spacing errors with sub-10 nm distances. "By analyzing the photoswitching fingerprints of multimeric receptors in the plasma membrane, we were thus able for the first time to estimate distances between receptor subunits in the range of 5-7 nm in cells and determine the number of labeled subunits," says Beliu.

In the next step, the research team intends to optimize the photoswitching fingerprint analysis and use it in combination with single-molecule localization microscopy using patterned excitation schemes and DNA-PAINT for reliable super-resolution imaging in cells with sub-10 nm resolution. This should provide new insights into the molecular organization of cellular structures, organelles, and multiprotein complexes, as well as the structural elucidation of protein structures using optical methods.

The newly developed method not only offers unique insights into molecular mechanisms in infection, lipid and cancer research: The photoswitching fingerprinting also has the potential to more realistically represent the dynamics and complexity of receptors in the nervous system that are important for signal transduction at the synapses of neurons. This interplay of neurons defines our daily learning and memory processes. "It is therefore fundamentally important to understand how this molecular orchestra assembles and functions," says Beliu, describing the significance of these research findings.

This technology will be presented by Prof Markus Sauer at the Translational Bioimaging Symposium (18 - 20th of September 2022) in Würzburg, Germany.

The study was funded by the European Research Council (ERC, under the European Union's Horizon 2020 research and innovation programme, grant agreement No 835102) and by the Deutsche Forschungsgemeinschaft (DFG SA829/19-1).