More than 100 alumni and alumnae who graduated university 15, 20, or 50 years ago gathered at the Jubilee Celebration to remember their time studying at the University of Würzburg. Among the jubilarians was the former JMU vice president Professor Dr. Wolfgang Freericks.

"They constitute an indispensable capital for the University as well as our society” addressed Professor Dr. Pauli more than 100 Alumni and Alumnae who graduated the University of Würzburg 15, 20 or even 50 years ago. “As ambassadors, mentors, networkers and supporters, you are essential to the productive exchange of knowledge”, emphasized the president of the Julians-Maximilians-University (JMU) Würzburg. This is the third time that Alumni advisor Michaela Thiel has organized a Jubilee Celebration – not least because former students had voiced their disappointment at receiving their degree certificate in an unspectacular administrative act or by mail.

Thus, this year’s Jubilee Celebration was even more festive, even without the subsequent reception which could not be held due to the pandemic. All alumni got their jubilee certificates handed to them personally and were able wear their doctoral cap or academic gown to take pictures. Musician Anja Günther, graduate of the University of Music Würzburg, accompanied the celebration by playing on her Swiss sound instrument, the “Hang”, as well as on her clarinet.

Dirk Kiesewetter, chair holder of the faculty of Business Management and Economics, honored jubilee Professor Dr. Wolfgang Freericks with a laudation. The native of Allgäu, born in 1940, once chose the University of Würzburg for his studies of Business Management and Economics and Geography, where he later on obtained his doctorate and habilitated. He declined an offer from the University of Hohenheim in 1976, but started his professorship at Würzburg’s faculty of Business Management and Economics in the same year. He occupied his professorship until 2006, and from 1993 to 2003 he held the position of JMU’s vice president. He remained closely linked to the faculty. Kiesewetter thanked his predecessor for the many years of commitment, before Professor Freericks received the Golden Doctoral Certificate.

The audience was not only welcomed by Dr. Pauli, but was addressed by climate mayor Martin Heilig as well as Professor Dr. Theodor Berchem, who himself was the university’s president for almost three decades. Today he is the chairperson of the Alumni Association. He approached the audience with “Iuvat vivere. It is a pleasure to live”. Further, he entertained the participants by sharing his personal experiences while he was in office: When the press once asked him what Würzburg would be without its university, he replied with “something like Ingolstadt”. City and University have formed a unity in Würzburg – for more than 400 years, or even 600 years some would say. The JMU is a very respectable university, which the ratings continually show. “This city would not be as famous without this university”, Berchem said, hinting at the importance of the discovery of x-rays at the beginning of the 20th century. “No matter where they are, for us, they are like ambassadors across the world”, mayor Martin Heilig emphasized.

Andreas Nickel, a genuine Franconian, and former Physics student between 1990 and 1996 successfully conveyed moody memories. At the beginning of his studies, natural scientists were in demand. However, after had he finished his degree, they were no longer needed. Like so many others, Nickel ended up working at SAP, and the company soon had the nickname of “meeting point of unemployed physicists”. He described his studies as physically demanding, because he had to constantly use his bike – his only motivation being the frozen “Streuselkuchen” at home in Zell; but also demanding in terms of physics, because they calculated from dawn till dusk and from dusk till dawn. Nickel also remembered his semester abroad in the United States including the opportunity to finish his studies there. What is completely normal nowadays was deemed “pretty exotic” back then.

At last, every jubilee was able to tell of their experiences during their time at the JMU. For instance, Dr. Rosemarie Bandt, who graduated 25 years ago, speaks of an “era of life”. She thought promoting in organic chemistry was the most impressing part, because she experienced her circle of people to be a tight-knit community. She spoke of a perfect combination of scientific work, which united the group, and beautiful moments.

Würzburg’s culture lovers might be familiar with Dr. Plagens, who can often be seen on and behind the stage of the “Theater Chambinzky”, as well as in its theater workshops. He studied VWL between 1990 and 1995, in which he later received his PhD. His study programme was popular for many reasons: students of VWL and BWL had to complete the same foundation courses; young people came from the new “Länder” to the JMU; and the civilian as well as military services were cut short. This meant that Plagens and his fellow students had their lectures in the canteen between 4 and 8 pm, accompanied by the smell of Brezeln. Plagens tells of an atmosphere similar to that of a beer tent, which he simultaneously associated with making friends during his studies that have remained in his life. Today, he leads the Specialty Department for Statistics at the City of Würzburg. However, he remains close to the University: He has been active as a lecturer at the Chair of Econometrics, teaching the course “European Economic Statistics”.

Annelie Maidhof was the only woman who had graduated in the 1950s at this year’s Jubilee Celebration, studying French and Italian to become a teacher from 1966 until 1971. She even studied abroad in Würzburg’s partner city Caen during her time. Due to financial reasons, all of this would not have been possible without the Honnefer scholarship. The first time she has ever seen the sea was in Caen – she grew independent in France, because it was her first time moving away from her parents and living on her own. “I have been francophone ever since”, the 75-year-old concludes. 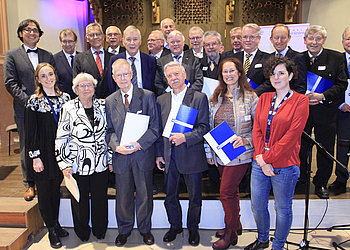 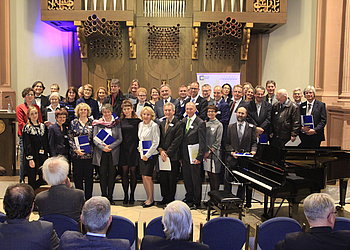 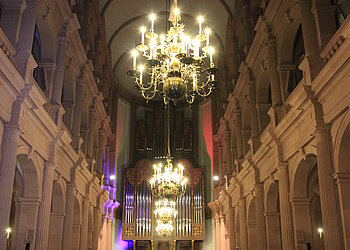 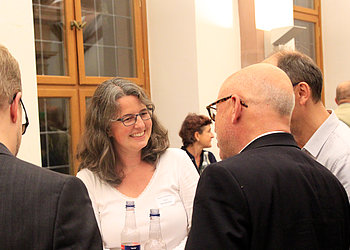 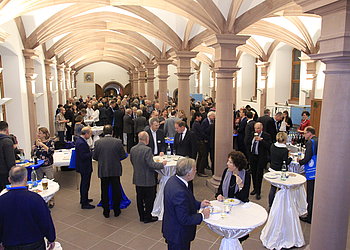 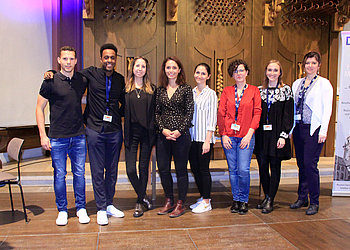