Substantial differences between the tumor-promoting enzymes USP25 and USP28 identified

Researchers from the Rudolf Virchow Center of the University of Würzburg (JMU) have solved the structures of the cancer-promoting enzymes USP25 and USP28, and identified significant differences in their activities. Both enzymes promote the growth of various tumors. The results were published in the journal Molecular Cell and could benefit towards the development of new, low-side-effects anticancer drugs. 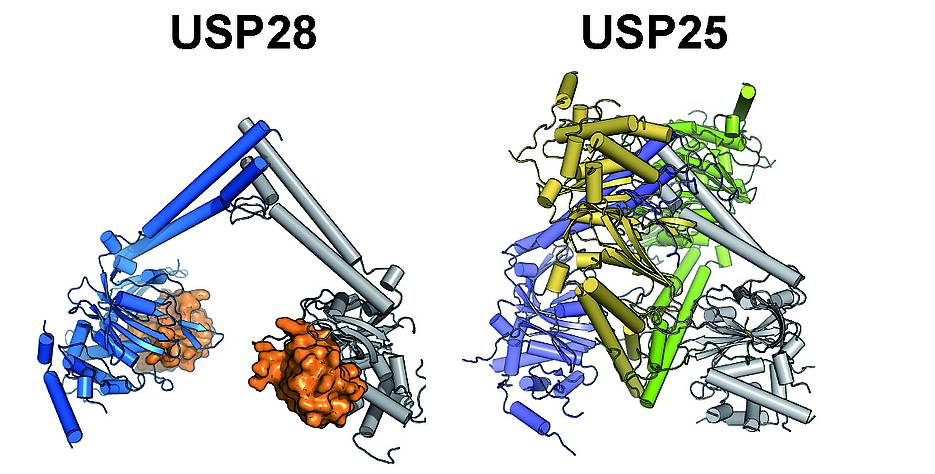 Structures of the catalytic domains of USP28 and USP25: USP28 is a constitutively active dimer and can bind and process ubiquitin (orange) at any time. In contrast, USP25 is a tetramer composed of two inter-linked USP28-like dimers (blue / gray and yellow / green) and this arrangement prevents binding of the substrate rendering the enzyme inactive.

The permanent interplay of protein production and degradation is a major driver of cellular metabolism. A key mechanism of this regulation is the labeling of a proteins with ubiquitin, a small polypeptide that plays important roles in many pathways, but also acts as a signal for protein degradation. Ubiquitination can be reversed by a group of enzymes, the so-called deubiquitinases, which are able to rescue the proteins. In cancer cells these opposing processes are assumed to be out of balance. Deubiquitinases have therefore emerged in recent years as promising drug targets for cancer therapy.

Structures of the catalytic domains

The study focused specifically on the deubiquitinases USP25 and USP28. Both enzymes are important for the progression of various types of tumors. The research of the two structural biologists Dr. Florian Sauer and Theresa Klemm from Prof. Caroline Kisker’s group at the Rudolf Virchow Center provides important insights into the structure and function of the two deubiquitinases. Using X-ray crystallography, the group was able to solve the three-dimensional structure of the central catalytic domains of both evolutionarily closely related enzymes and they uncovered similarities as well as crucial differences.

"It was surprising to discover that USP25, despite its structural similarity to USP28, is inactive in the isolated form (in vitro) as well as in cells (in vivo), and that there is a correlation between the oligomeric state and its activity," says Sauer. The researchers' analysis showed that the inactive USP25 forms a tetramer, a molecular complex of four-subunits. In contrast, USP28 exists as a constitutively active dimer, a molecular complex of two identical subunits. "By inserting alterations, found in cancer cells, we were able to show that the USP25 tetramer dissociates into two USP28-like dimers, thereby abolishing the auto-inhibition of the enzyme," reports Klemm.

A new guide for cancer drugs

This knowledge provides the molecular basis for the development of new and highly specific anti-cancer drugs, with a low risk of side-effects. "On the one hand, new approaches have been identified that could, for example, be used to develop tailor-made drugs targeting specifically USP28, thereby preventing inhibition of USP25, which is important for the immune response," says Sauer. "On the other hand, specific targeting of the already per se inhibited USP25 seems feasible by preventing its activation," adds Klemm.

In addition to the Rudolf Virchow Center of the University of Würzburg, the Department of Clinical Tumor Biology of the University Hospital Tübingen was also involved in this research. The German Research Foundation (DFG) funded the study with the "Targeting Therapeutic Windows in Essential Cellular Processes for Tumor Therapy" (FOR 2314) and "Understanding Ubiquitylation: From Molecular Mechanisms to Diseases" (GRK 2243) projects.

People
Dr. Florian Sauer (Postdoc) and Theresa Klemm (PhD student) work in the research group of Prof. Caroline Kisker at the Rudolf Virchow Center for Experimental Biomedicine of the University of Würzburg (JMU).

Prof. Caroline Kisker is i.a. the Head of the Department of Structural Biology and Dean of the Graduate School of Life Sciences at the University of Würzburg.  Since April 2016 she is part of the dual leadership of the Rudolf Virchow Center for Experimental Biomedicine.