Professor David Stegner recently accepted the professorship of Vascular Imaging at the Rudolf Virchow Center. With his group, he studies the interactions of blood platelets with immune cells and how these affect inflammatory processes such as stroke. 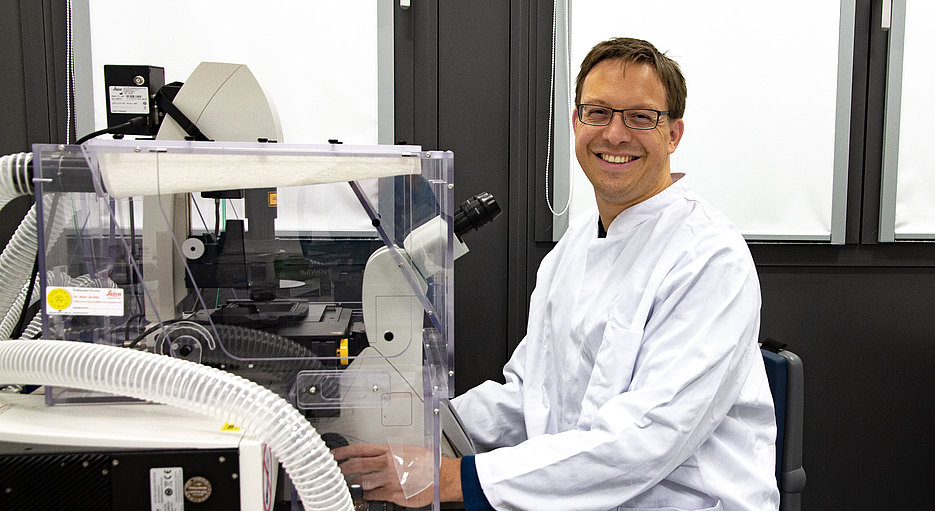 Prof. Dr. David Stegner accepted the professorship for Vascular Imaging at the Rudolf Virchow Center for Integrative and Translational Bioimaging in summer 2021. He uses state-of-the-art fluorescence microscopy to improve our understanding of so-called "thrombo-inflammation," inflammatory processes controlled by platelets. "This inflammatory event can cause additional damage to healthy tissue in the context of an infarction or stroke. We want to understand the exact processes so that patients can receive better treatment in the future," explains Stegner.

The function of platelets in stopping bleeding in wounds has long been known. In the worst case, blood clotting can also lead to blood clots (thrombi), which can block blood vessels and lead to the death of the tissue behind the clot. This is the case, for example, in stroke. For this reason, standard treatment involves removing the thrombus as quickly as possible to save the undersupplied tissue.   However, it was shown that in many patients, even after removal of the thrombus, the tissue behind the occlusion is damaged. The researchers showed in previous studies that platelets can attract immune cells to the affected tissue. "To some extent, this is quite useful, because, for example, cellular debris from the dead cells needs to be disposed of by the immune cells. However, an excessive reaction of the immune system can also lead to the death of healthy cells," Stegner explains. His research is focused precisely between the desired and the excessive immune reaction. Equipped with the additional resources of the professorship, he can now intensify this research and extend it to infectious disease models.

An important tool in his research are the microscopes with which his group can take intravital images, i.e., on the living organism. "With the high-performance fluorescence microscopes available at the Rudolf Virchow Center and Institute for Experimental Biomedicine, such as the confocal or 2-photon microscope, we can observe not only spatially but also temporally how the processes take place and which receptors and proteins are involved," Stegner explains. Only when all these factors are known we can think about medical interventions.

After studying biochemistry in Bayreuth, David Stegner came to Würzburg for his PhD at the Chair of Experimental Biomedicine. After various postdoctoral projects at the University Hospital Würzburg and the Rudolf Virchow Center, he started his own research group at the Institute for Experimental Biomedicine at the University Hospital Würzburg. He has been project leader in two Collaborative Research Centers and is Scientific Secretary of the Transregio-CRC 240. Since 2021 he is W2 Professor at the Rudolf Virchow Center of the University of Würzburg.