Dr. Tamara Girbl started her new research group at the Rudolf Virchow Center of the University of Würzburg in April. She focuses on the interaction of immune cells and blood vessels, which plays an important role in many inflammatory diseases or even strokes. 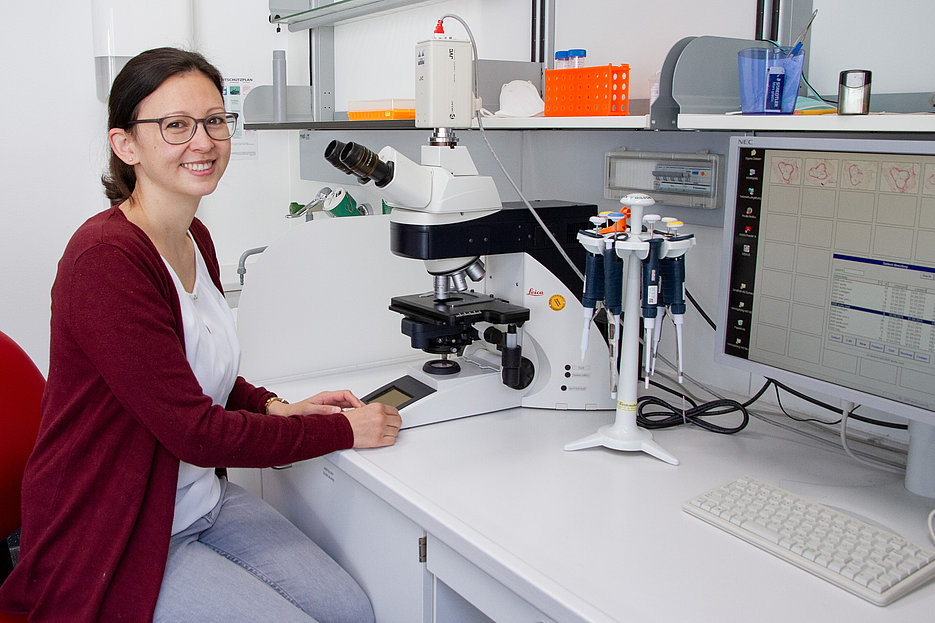 Dr. Tamara Girbl in her laboratory at the Rudolf Virchow Center.

In the event of an injury or inflammation, various signaling substances activate immune cells (leukocytes). The leukocytes reach the corresponding site in the body via blood vessels and migrate from the blood vessel into the surrounding injured tissue in order to fight off any pathogens. To achieve this, leukocytes must penetrate the blood vessel wall, which consists of two different cell types. This process takes place in venules, the finely branched vessels that transport the blood back to the heart after the exchange of metabolites in the tissue. The inner layer of the venular blood vessel wall is formed by so-called endothelial cells, the outer layer by pericytes. While the migration of immune cells through the endothelial layer has been well studied, quite little is known about the interaction with pericytes. Dr. Tamara Girbl is investigating this with her new research group.

"The medically useful migration of immune cells into the affected tissue can also get out of control," explains Girbl. For example, if there is excessive migration of activated leukocytes after a stroke, they can cause more harm than good and thus lead to a poorer prognosis for the patient. "That is why it is essential to understand the mechanisms by which immune cells can penetrate the blood vessel wall and how this migration is regulated at the molecular level," Girbl emphasizes.

In her research to date, Girbl has shown that the pericytes influence the migration of leukocytes into the inflamed tissue by releasing small signal proteins. However, not only the pericytes but also the immune cells themselves release signaling substances, so there is an exchange between these cell types. "If we understand these interactions in detail, we could develop therapeutic approaches to minimize excessive immigration and thus also mitigate the harmful side effects of the immune response," says Girbl.

About Tamara Girbl
Tamara Girbl received her PhD in genetics and molecular biology from the University of Salzburg. She deepened her knowledge during a postdoctoral stay as a British Heart Foundation fellow at Queen Mary University in London. After another postdoctoral position at the Institute of Science and Technology (IST) in Austria, she accepted the position at the Rudolf Virchow Center - Center for Integrative and Translational Bioimaging at the University of Würzburg to establish her own research group.