Researchers at the universities of Würzburg and Frankfurt have developed a new compound for treating cancer. It destroys a protein that triggers its development. 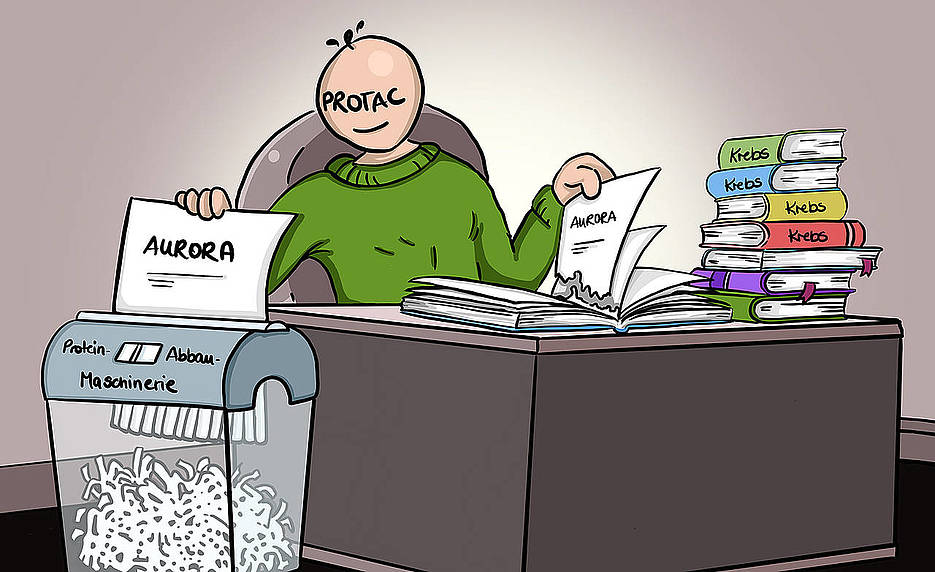 The villain in this drama has a pretty name: Aurora – Latin for dawn. In the world of biochemistry, however, Aurora (more precisely: Aurora-A kinase) stands for a protein that causes extensive damage. There, it has been known for a long time that Aurora often causes cancer. It triggers the development of leukemias and many pediatric cancers, such as neuroblastomas.

Researchers at the universities of Würzburg and Frankfurt have now developed a drug that can disarm Aurora. Dr. Elmar Wolf, biochemist and research group leader at the Biocenter of Julius-Maximilians-Universität Würzburg (JMU), and Stefan Knapp, Professor of Pharmaceutical Chemistry at Goethe University Frankfurt, have played a leading role in this development. The results of their work have now been published in the latest issue of Nature Chemical Biology.

“Cancers are usually triggered by tumorigenic proteins,” explains Elmar Wolf. Because cancer cells produce more of these proteins than normal cells, the dynamics are additionally increased. A common therapeutic approach is therefore to inhibit the function of these proteins with drugs. “Although the proteins are then still there, they no longer function as well. This makes it possible to combat the tumor cells,” he says.

However, the development of these inhibitors is difficult and has so far not been successful for all tumor-promoting proteins. To date, none of the candidates that inhibit Aurora has shown the desired results in clinical practice. The dream of many scientists is therefore to develop a drug that not only inhibits the tumor-promoting proteins but makes them disappear completely. A promising approach along this path could be a new class of substances with the scientific name “PROTAC”.

“We have developed such a PROTAC for Aurora,” says Elmar Wolf. Together with his team and especially his doctoral student Bikash Adhikari, he was able to show that this PROTAC completely degrades the Aurora protein in cancer cells. Such cells cultivated in the laboratory died as a result.

Wolf describes the mode of action of this substance as follows: “The tumor needs certain tumor-promoting proteins, which we can imagine as the pages of a book. Our PROTAC substance tears out the ‘Aurora’ pages and destroys them with the help of the machinery that every cell has to degrade old and broken proteins.” PROTAC thus “shreds” the Aurora protein, as it were, until nothing of it remains.

Professor Stefan Knapp from the Institute of Pharmaceutical Chemistry at Goethe University explains: “Aurora-A kinase is present in much higher concentrations in many cancer tissues than in healthy tissue and it also plays a key role in prostate cancer. Blocking the activity of Aurora-A kinase alone seems not a promising approach as none of the many clinically tested drug candidates has achieved clinical approval. With our PROTAC variant, we inhibit Aurora-A kinase via another, possibly more effective mechanism, which may open up new treatment options. That’s why in the next step we’ll test effectiveness and tolerance in animal models.”