Invitation to the Space Colloquium Würzburg titled "High Precision Formation Flying of Micro-satellites for Space Science and Earth Observation Missions" by Prof. Dr. Shinichi Nakasuka (University of Tokyo) on the 5th of May 2022 at 11:00. This event is supported by Elite Network of Bavaria (ENB) and ESA_Lab@ZfT. 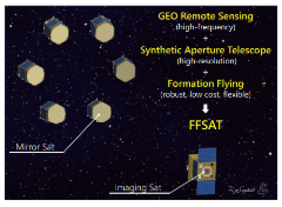 Formation flying has been recognized as promising technique for small or micro-satellites to conduct meaningful space science and/or Earth observation missions. However, currently realizable accuracy of relative position and attitude control between formation flying micro-satellites, such as cm-level accuracy, has not been enough to realize space science and Earth observation missions as, for example, interferometric observation usually requires such ultra-high accuracy as tenth of observation wave length. Our laboratory has been studying methods to solve this problem in several ways, by utilizing sensor fusion techniques of navigation sensors and scientific observation sensors. In the lectures, practical formation flying missions such as a synthetic aperture Earth observation telescope, infra-red interferometric observation mission, and X-ray telescope mission are first introduced, and then technologies to realize the meaningful observations will be described. Minimum fuel orbital control to keep relative positions of two satellites during observation and to transit to the next observation target will also be described. In addition to that, University of Tokyo’s activities up till now to develop and launch 13 micro/nano-satellites will be briefly overviewed.A variety of interesting and useful applications are possible in satellite formation flying missions, both as a substitute to single large satellite missions as well as the ones unique to the formation flying missions. Wide-area and/or frequent Earth observation for remote sensing and monitoring geographic regions of interest, telescopic formation for solar or deep space observation, computer tomography of clouds etc. are a few examples. To derive maximum benefits from the formation flying of spacecraft, it is necessary to guarantee the intended formation with minimum deviation under the realistic scenarios such as elliptic orbits and in the presence of disturbance forces such as the J_2 gravitational perturbation. To achieve this ambitious objective, powerful guidance laws based on advanced nonlinear and optimal control theory are the need of the hour. The seminar talk will discuss several such techniques, followed by summarizing their relative merits, and providing some insightful recommendations under various scenarios. In fact, the seminar will briefly expose the audience about the topics covered in one of the recently published books of the speaker along with his co-author.

Interested persons can join in for the presentation at https://go.uniwue.de/space-colloquium.

Curriculum Vitae Prof. Dr. Shinichi Nakasuka: Prof. Shinichi Nakasuka graduated from Graduate School of Engineering, University of Tokyo and received Ph.D in 1988. He joined IBM Research during 1988-1990, and then has been working for Department of Aeronautics and Astronautics, University of Tokyo and now is a full professor. He is a member of JSASS, SICE, and IAA, and the former Chairperson of IFAC Aerospace Technical Committee and currently chairperson of UNISEC-GLOBAL. His major research areas include micro/nano/pico-satellites, autonomy and intelligence for space systems, novel space systems, and guidance, navigation and control of spacecraft. He developed and launched 13 micro/nano/pico-satellites successfully including the world first CubeSat launched in 2003. He is also a member of Space Policy Committee of Japanese government.