To learn more about the practice of operating a satellite mission, our SaTec students visited the European Space Operations Centre (ESOC) in Darmstadt. 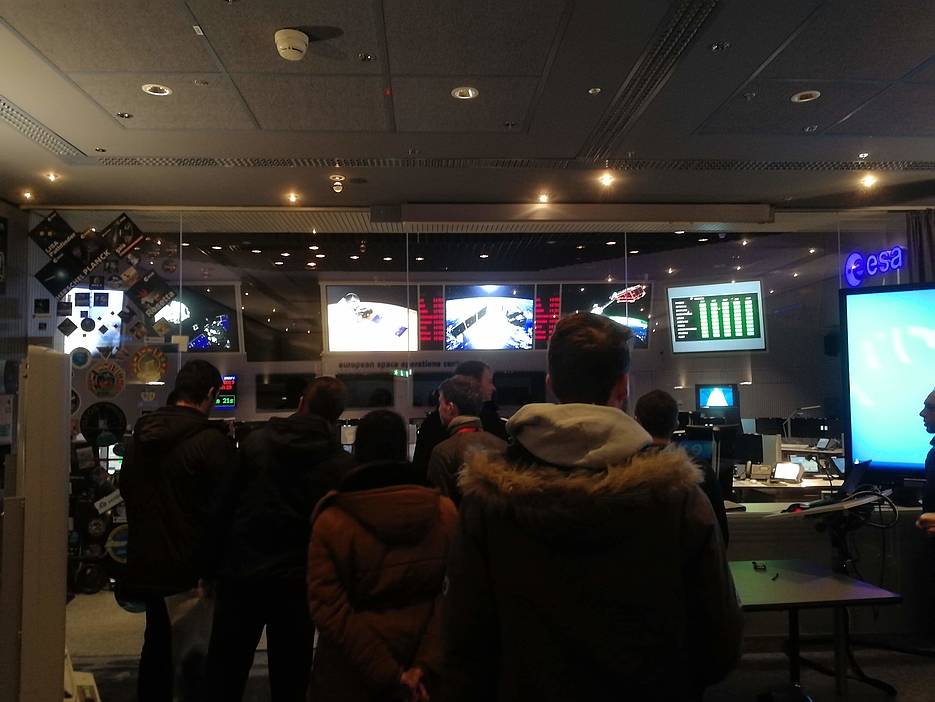 Operation of satellites in daily practice

Early in the morning, the students of the Elite graduate program "Satellite Technology" started their trip to Darmstadt to visit the European Space Agency’s (ESA) Space Operations Centre ESOC located there. After a quick coffee, the lectures started. They were given by Dr. Marcus Kirsch (Spacecraft Operations Manager) and Nikolai von Krusenstiern (Spacecraft Operations Engineer).

The two lecturers covered the theoretical concepts of operating a satellite mission and added useful examples from their many years of practical experience in operating the XMM-Newton X-ray telescope. For almost 20 years, the satellite has provided data on X-rays that are emitted by various high-energy processes in the universe.

In order to continue to guarantee a successful mission, the safety of the satellite always comes first when operating the satellite. A highlight of the lecture was the report on an incident in October 2008, when the satellite was not responding for several days due to a component failure in a switch. In such extreme situations, both the team's many years of experience and creativity in identifying the cause of the error are required.

After the lecture, the students had a guided tour through the control rooms from which the various ESA satellite missions are operated. Highlights were the Main Control Room, well-known from TV reports about numerous satellite launches, as well as the test model of the comet hunter ROSETTA in its original size, including the Philae landing module, and the model of the X-ray telescope XMM Newton.

The students in the Elite graduate program "Satellite Technology" should understand the entirety of a satellite system through an interdisciplinary approach. With in-depth knowledge of the different subsystems of a satellite mission, students in system engineering should learn to find compromises in the event of conflicts between these subsystems. Visits to various facilities are intended to sensitize the students to the various aspects of a satellite mission on the one hand, and on the other hand to establish contacts with potential future collaboration partners and employers.