Deutsch Intern
Center for the History of Psychology

"It's a boy!" On the 200th Birthday of Hermann von Helmholtz on August 31, 2021 Potsdam, 1821: "Hurray, it's a boy!" is the Helmholtz family's toast to little Hermann, who would celebrate his 200th birthday on August 31. What else would he have invented or discovered to this day? He is still present today as the namesake of the Association of German Research Centers and, of course, in his great discoveries. 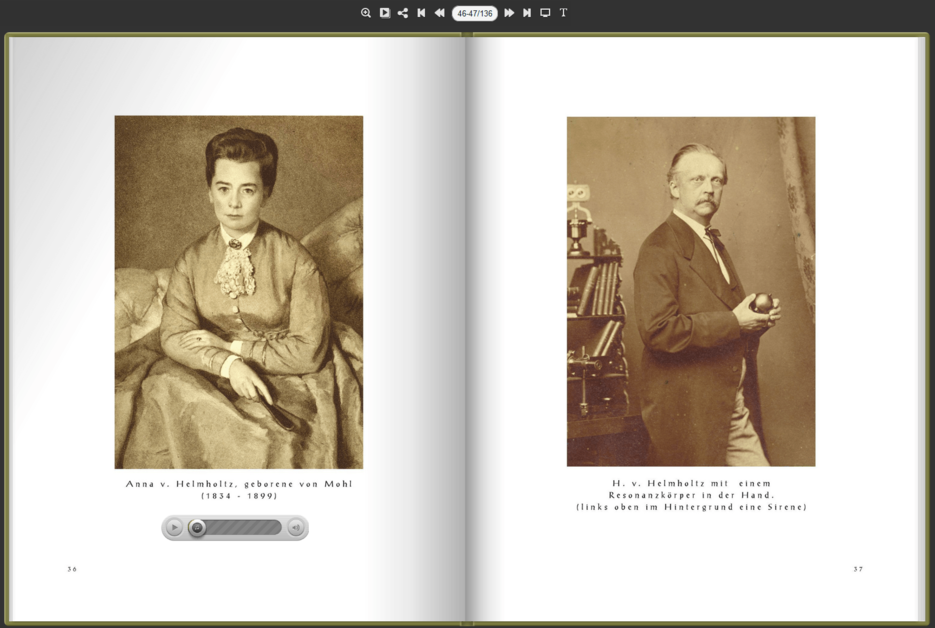 Helmholtz's scientific career can already be glimpsed in his school days: With a friend, he experimented like mad in the physics and chemistry laboratory, and in 1838 he passed his Abitur (similar to a high school diploma) with an excellent thesis in mathematics. In short, a young man with all doors open to him. The financial situation was more problematic, however, because the family simply could not afford the studies in the natural sciences that Helmholtz had dreamed of. On the advice of his father, Helmholtz decided to study medicine in order to receive a scholarship from the Prussian state. So Helmholtz studied medicine diligently, only to find himself in the operating room of the Charité - but in his scarce free time he continued to do research and soon had his first major successes in research and in love - he married Olga von Velten in 1849.
By 1863, Helmholtz had written his tome on "Die Lehre von den Tonempfindungen als physiologische Grundlage für die Theorie der Musik," (On the Sensation of Tone. As a Physiological Basis for the Theory of Music) which deals with the production and decomposition of sounds, the theory of music, the disorders of harmony, and the relationship of the sounds major and minor. Unfortunately, his life also took place in a minor key: his wife Olga died of tuberculosis in 1859. Two years later, however, Helmholtz sent out engagement announcements again. Helmholtz's second marriage to Anna von Mohl brought him a young wife, happiness and three children.

During his years at the University of Königsberg, Helmholtz laid the foundation for modern psychology by measuring the speed of nerve conduction. He was interested in the question of what mechanical work a muscle can do, especially in the context of the psychological, because: muscle activity is the easiest expression of the psychological to observe. Other researchers before him also dealt with this topic, but Helmholtz wanted to go beyond this and developed an experimental arrangement with which it becomes possible to initiate a single muscle twitch by an electrical stimulation of very short duration. For this purpose, Helmholtz clamped a freely prepared calf muscle of a frog's leg into his designed measuring apparatus in order to stimulate it like that. In this way, Helmholtz was able to create progress curves of a muscle twitch and prove that the transmission of information in the nerve fibers takes measurable times - an incredibly important discovery for psychology, because if nerve processing processes can be measured in the periphery of the body, they can also be measured in the central nervous system of humans, the brain, and thus the object of study of psychology.
At about the same time, Helmholtz invented the so-called ophthalmoscope. This can be used to examine the back of the eye in a living person. The new examination instrument quickly spread to ophthalmologists' offices. Later, Helmholtz presented the Young-Helmholtz three-color theory of vision and undertook research on hearing by having various resonators built to make even soft tones audible in sounds.
I wonder what else he would have been up to? If he were celebrating his 200th birthday with us today, he would certainly tell us at a small garden party. In this sense: All the best to the bicentennial birthday!
P.S. As a small birthday present for the great scientist, we have reissued the book that accompanied our former Helmholtz exhibition in digital and multimedia form:
To the book:  Hermann von Helmholtz - Ein Wegbereiter der wissenschaftlichen Psychologie (Hermann von Helmholtz - A Pioneer of Scientific Psychology)