Molecular Pointillism: Imaging the nano-world one molecule at a time 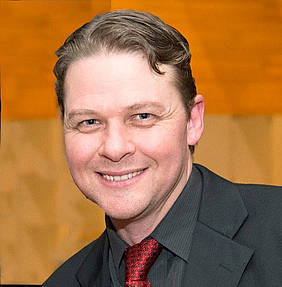 Dr Toby Bell is a Senior Lecturer at Monash University in Melbourne, Australia where he heads a multi-disciplinary research group which uses time- and space-resolved fluorescence techniques to investigate systems ranging from small molecules to whole cells. A particular focus of the group’s research over recent years has been the application of single molecule super-resolution imaging to study cellular ultra-structure and organelles including microtubules and nucleoli.

Toby received his PhD in 2002 from the University of Melbourne and then undertook post-doctoral research, firstly at the Max Planck Institute for Radiation Chemistry in Germany and then at the Catholic University of Leuven in Belgium. He was appointed to the Science Faculty at Monash University in 2009 as a Lecturer in Physical Chemistry, becoming tenured in 2014.

It is now possible to see a single molecule of matter by fluorescence. Through the combination of careful placement of fluorescent ‘labels’ and controlling when they emit light, scientists can now generate microscopy images with detail on the scale of nanometres, thereby circumventing the diffraction limit of light. This breakthrough was the basis of the 2014 Nobel Prize in Chemistry, awarded to Betzig, Moerner and Hell.

In this talk, I will provide an introduction to the phenomenon of fluorescence and explain how detection of single molecules is used to achieve so-called ‘super-resolution’ microscopy. I will then describe how scientists are using this to ‘paint pictures’ of the nano-world in a fashion analogous to the artistic method of Pointillism, where each ‘point’ is literally one molecule. I will illustrate with many examples, including from my laboratory at Monash University which are relevant to current research in disease, bacteria and viruses.

The presentation and the following discussion are open for the public and will be held in English. All interested parties are welcome!