The photograph on the right shows a part of Würzburg's Old Town. And the many steeples and spires might easily create the wrong impression, since- yes, Würzburg is part of the predominantly catholic state of Bavaria, it is a bishop's see, and it definitely has quite a number of churches. But all this does not mean that the city is arch-conservative or stuffy, as a commonly-held and often-parroted prejudice holds. In reality, however, Würzburg is different - and of course, this is chiefly due to the students.

Towards the end of World War II, Würzburg was almost completely obliterated in an air raid. And still there are enough of the old structures left to make the city one of the must-sees in Germany - thanks to the Residence (UNESCO World Cultural Heritage), the Cathedral, the Fortress Marienberg, the pilgrimage church of the "Käppele", and also to the many historical university buildings and other sights.

Atmosphere at the River Main

A prime instance is Alte Mainbrücke, the Old Bridge across the River Main. With its imposing stone statues and the lovely view of the Fortress and the Old Town, it has a unique flair, particularly in the evenings. The promenades, lawns, and beer gardens that line the river also contribute to the pleasant atmosphere. "Stadtstrand" for example, the artificial city beach right next to the river, where you can feel the sand beneath your bare feet while enjoying a drink.

And Würzburg is not only green along the river. Green is the city's dominant color because of its extensive Ring Park that encompasses Old Town like a belt, and because of the Gardens of the Residence, the vineyards, the grounds of the former State Gardening Exhibition, the long-drawn-out Steinbachtal that merges into the city forest, and because of the roughly 40,000 trees in the city area.

And as if that was not enough, Würzburg is warm and dry as well. Well-protected by low mountain ranges, it has less precipitation than almost any other region in Germany. It is not uncommon for the weather to remain dry for weeks, not only in the summer - in all, a mild climate perfect for winegrowing.

Downtown is easily manageable and can be negotiated quickly by bicycle or by walking. Riding the streetcars, it can be crossed in a matter of minutes. Würzburg has very favorable long-distance traffic connections: It is situated  near Autobahns A3 Nürnberg-Frankfurt, A7 Kassel-Ulm, and A81 towards Stuttgart, the  ICE fast-train station is an important junction in the German railroad network. And the airports in Frankfurt or Nürnberg are not very far away either. 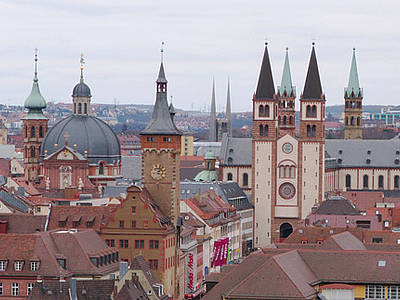 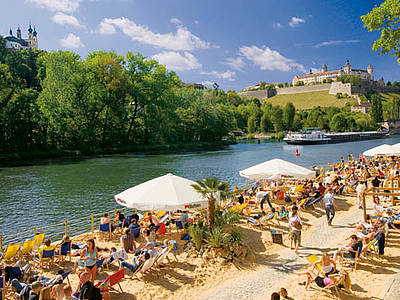 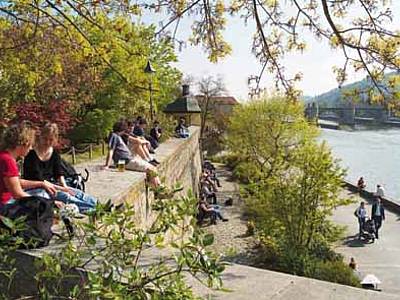 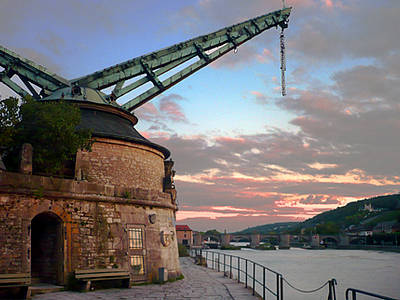 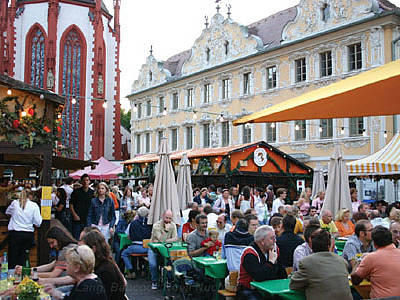