Turkish girls obediently do what their parents tell them to do. And they are eagerly awaiting to play their role as stay-at-home moms – in Germany, stereotypes like these about young Turkish women are quite common. But now, they have been disproved by a study of the University of Würzburg. 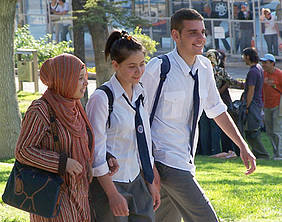 The Würzburg study outlines the image of a young and self-confident generation of Turkish girls who have a very clear concept of what they want to do in their spare time and how they plan their future.

"The amazing thing is that the girls partly exceed their Turkish male peers by far", says Professor Heinz Reinders, director of the study and holder of the Chair of Empirical Educational Research at the University of Würzburg. Almost all Turkish girls demand more autonomy from their parents than do the boys. In some areas, such as leisure activities, the differences are less obvious, while they are comparatively large in other fields, like the choice of a professional career, for example.

Choice of friends and leisure activities

The lower degree of autonomy reported by the boys becomes even more apparent when asked for the time spent with the family. 65 percent of the boys want to decide on their own about joining in family celebrations. The girls appear more self-confident: 75 percent of them want to make this decision independently.

"Of course, these wishes do not tell much about the actual autonomy", comments Heinz Reinders. "However, it shows that Turkish girls strive more for autonomy than do the boys. There's a small revolution taking place".

This "small revolution" becomes particularly apparent in their communication with their parents. 85 percent of the girls say that they defend their points of view to their parents. With a proportion of 76 percent, the Turkish boys are not quite so brave. The girls also carry in more proposals with regard to family life than the boys (81 vs. 74 percent).

Choice of professional career: Parents should not interfere

Turkish girls are also more self-confident regarding their choice of career: 77 percent do not want their parents to interfere in selecting their favorite job. Only 62 percent of the boys say so. Indeed, the choice of profession seems only rarely to be the reason for disputes in both groups. Only twelve percent of both girls and boys mention this subject as a frequent source of controversy with their parents.

Detachment from the parents

"In the process of detachment from their parents, there isn't so much difference between Turkish and German girls any more. Girls have the edge over the boys also in German families", says Heinz Reinders.

In this context, the Würzburg education researcher assumes correlations with the degree of integration, which seems to be greater among Turkish girls than boys. Girls are also less desirous to return to their home country than boys (11 percent vs. 15 percent). Furthermore, the girls seem to be more relaxed in their relationships with people from other cultures: 78 percent of the girls, but only 69 percent of the boys rate themselves as having high intercultural openness.

Summing up by Heinz Reinders, the project's leader

"The amazing thing about the results is their normalcy. Like German boys, Turkish boys take a little longer to detach from their families. Apparently, the girls are better integrated and this seems to accelerate their detachment from the family", says Professor Reinders. He concludes: "If they have ever been in a majority at all, the chances of coming across a withdrawn and shy Turkish girl are considerably less than meeting a self-confident and well-integrated one."

Facts about the study

The study was performed on the basis of interviews with 400 girls and 430 boys of Turkish origin aged between 12 and 17 years. The survey was conducted between 2005 and 2008 among pupils from a secondary modern school in the Rhine-Neckar region.