Women react differently. So do men.

The FIFA Women's World Cup in Canada is currently ongoing. The German national team got off to a great start by defeating Ivory Coast 10-0. A study conducted by two Würzburg scientists reveals the effects television broadcasting of the matches can have on the audience. 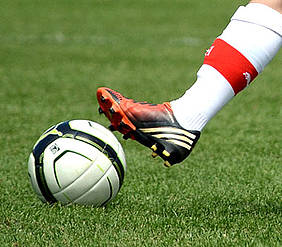 "A huge disappointment": That was the headline in the German newspaper "Süddeutsche Zeitung" about five years ago. Although regarded as the favourite team before the event, the 0-1 loss to Japan led to Germany's early elimination in the quarter-finals. Germany was devastated, whereas Japanese fans were in high spirits.

Back then, two scientists investigated how such sports events affect the moods and specific judgements of spectators: Holger Schramm, Professor of Media and Business Communication at the Institute of Human-Computer-Media and his colleague Johannes Knoll. They have just published the results in Communication Research, the highest-ranking journal at present in the field of media and communication science.

Holger Schramm puts the central message of the study in a nutshell: "The outcome of a football match has a significant impact on the mood and the general judgements of the spectators – however, the effect was only noticeable in football-crazy men that strongly identify with the team." For their study the scientists asked 180 viewers to complete an online questionnaire after a victory and a loss of the German national team respectively during the Women's World Cup 2011. The participants were asked to assess their current mood and make statements, for example, about their self-esteem, their financial situation and their satisfaction with their government's work.

As expected, viewers who had watched the women's national team win the second match of the preliminary round were in a better mood after the match than before. The opposite effect was observed in the spectators who had witnessed the team's defeat in the quarter-finals, however not in a significant way. For this reason, the scientists concentrated only on the victory for the purpose of analysing the data. The result: Only men who identified moderately to strongly with the German team were in a different mood after the match. In contrast, women in general and men who identified only weakly with the German team did not exhibit significant mood variations.

Women are interested in the competition, men in the outcome

"We attribute this difference between the sexes to the fact that men are more interested in the competitive aspect and the outcome of such matches than women," Holger Schramm explains. The study finds that although women may identify with "their" teams just as much as men do and are equally passionate about them, they are usually less concerned with the outcome of the competition.

And because men, at least until now, have identified much more strongly with the men's national football team than with the women's team, scientists assume that these effects could be even more pronounced in sports events with male participation.

A good mood affects other judgements

The result was similar when further effects of the victory in the preliminary round were studied, for example, on self-confidence, judgement of their own financial situation and satisfaction with the government. In these regards, too, only the male spectators who identified moderately to strongly with "their" team were found to be susceptible. Men who were particularly passionate about the performance of the German women's team had greater self-confidence after the win, they assessed their financial situation more positively and were more satisfied with the work of their government than before the match. This effect persisted for three days. Again no impact was found in men who identified only weakly with the German team or not at all and in women.

According to the researchers, however, this does not directly lead to the conclusion that a German victory in football will assure the government good marks: "People's judgement of economic and political aspects is generally based on their current mood," Holger Schramm explains. And this mood can be influenced significantly by sports events. Seen in this light, it may seem reasonable for politicians and other decision-makers to seek the proximity of major sports events in the hope of drawing some of the positive aspects to their own person and ideas.