Why the Heart Beats on the left

In all vertebrates - and thus also in the human - the heart usually beats on the left side of the body. Why this is the case has not been understood in every detail yet. Developmental biologist from Würzburg now made a crucial step towards the solution of this riddle. 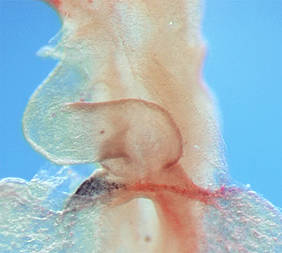 When a fertilized ovum is to grow into a viable organism during its embryonic development, one of the things the cells need to know is where left and right are, so that the organs eventually wind up in the right spot in the right shape. Thus the heart of all vertebrates, for instance, develops from an initially tubular shape that already shows a flexion towards the right side of the body shortly after its formation. This initial asymmetry is the reason why the tip of the heart - after a number of further rotations - in the end points towards the left side of the body.

How the body distinguishes right from left

How does the organism manage distinguish right from left? And which processes are responsible, for example, for the fact that heart usually beats on the left? The Würzburg-based developmental biologist Professor Thomas Brand and his colleague Dr. Jan Schlüter pursued this question. The current online issue of Proceedings of the National Academy of Sciences PNAS reports their result. In chicken embryos, the two researchers were able to characterize a signal pathway that plays a role in the asymmetrical development of the heart.

"So far the leading opinion was that a certain signal pathway is responsible for the left-sided development of organs that needs to be inhibited on the right side so that an asymmetry can develop", says Thomas Brand. As the two developmental biologists have shown now, this concept is not accurate: "With the chicken embryo, we could prove that an autonomous signal pathway also exists on the right side", states Brand.

Asymmetry is the rule, not the exception

Asymmetry in the body: Is it not the exception from the rule that applies to no more than the heart, liver, and spleen, while the majority is virtually built as a mirror-image? "Not at all", says Brand. In principle, the entire body is built asymmetrically; to make it appear symmetrical nevertheless, numerous signal cascades have to become active during the embryonic development.

In their work, Brand and Schlüter intensively examined mechanisms that play a role in the right-left characteristics. One of them is the asymmetrical production of ionic pumps. "This leads to an uneven distribution of electrical charge on the right and left side of the body that seem to show the cells the way", explains Brand. In the developmental biologists' experiments, blocking these ionic pumps led to a random distribution of the cells in the heart that are the preliminary stage of coronary blood vessels: At times they were located, as is usual, on the right side; at times they ended up on the left. In other cases they settled on both sides; occasionally they were missing completely.

"Thus this effect also plays an important role for the lateral orientation of the organs", says Thomas Brand. But to him, this is not sufficient as the sole explanation for the 'left-sided heart'. The same applies to another mechanism: the programmed cell death. "In this case, the organism ensures that cells die along the midline of the embryo to mark the border between the left and the right side of the body", explains Brand. If the scientists prevented this cell death, the cells would settle in the heart, also according to the random principle.

FGF8: This is the name of the signal factor that is responsible for the right-sided development of the chicken heart according to the findings of Brand and Schlüter. Thus, their conclusion is: "The models for the right-left development have to be expanded." The fact that other vertebrates, such as the South African clawed frog or the river lamprey, build hearts in a similar manner speaks for the concept that this aspect of the right-left asymmetry is evolutionarily ancient.

If this is also relevant for mammals, and thus for humans, is not clear. After all: "FGF8 mutations cause heart deformities in mice. This signal pathway might be significant for the right-directed heart flexion in the very early stage of the development, says Thomas Brand. The focus of his further research will thus be to identify the target genes of this signal pathway to better understand this aspect of the heart development on a molecular level.