Where electrons get stuck in traffic

The thinnest wire in the world, made from pure gold, is being examined by physicists from the universities of Würzburg and Kassel. Its exceptional electrical conductivity is causing quite a stir: the electrons do not move freely through the wire, but like cars in stop-and-go traffic. 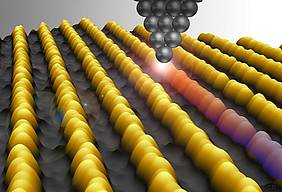 Normally, electrons, the carriers of an electrical charge, crisscross through metals or other electrically conductive materials. But this situation changes as the conductors are made smaller and smaller.

Würzburg physicists under Professor Ralph Claessen have taken miniaturization to the extreme: their nanowires consist of single gold atoms arranged in chains – it is not possible to go any smaller than that. In collaboration with Professor René Matzdorf from the University of Kassel and Luc Patthey from the Paul Scherrer Institute near Zurich, they have now examined the electrical properties of these nanowires.

In the nanowires, the electrons are so congested that they can only move in one direction, namely along the wires. And even this bit of freedom cannot be exploited to the full. They only move along in a stop-and-go manner, just like cars in a jam on the freeway with just one lane at their disposal: only when one car in the line of traffic moves forward a bit can the others do likewise. “The movements of the electrons in a nanowire are correlated just like this,” says Matzdorf. “This means they can only absorb selected energies, which is reflected in electrical conductivity and which we have measured precisely in an experiment.”

This electron jam has now been proven experimentally by Claessen’s team in collaboration with their colleagues from Kassel and the Paul Scherrer Institute. The scientists achieved this using highly sensitive measuring techniques, scanning tunneling microscopy, and photoemission. This enabled them to verify the unusual states of the electrons directly. Their findings have been published in “Nature Physics”.

Why is a leading journal reporting the results of this research? “Because in atom chains we now have previously unknown capabilities for measuring the properties of a one-dimensional quantum liquid,” says Claessen. Physicists speak of a quantum liquid when the electrons are confined in such narrow lanes. Theoreticians predicted the properties of this “liquid” back in the 1960s. But very few of them have actually been observed in experiments as well, until now.

Nanowires as the basis for success

It has taken decades to generate these special electron states experimentally in atomic nanostructures. “This is mainly due to the fact that the nanowires produced previously were too close together and influenced each other, preventing the creation of a quantum liquid,” explains Claessen’s colleague, Jörg Schäfer.

The Würzburg physicists resolved this problem a good two years ago: using a sophisticated procedure, they vapor deposit gold atoms onto germanium plates such that they automatically arrange themselves into parallel linear chains far enough apart from one another.

The physicists now want to use the nanowires as an atomic building block. They are thinking, for example, of inserting contacts between the wires consisting of single atoms or molecules, which would equate to tiny atomic switching elements. The intention behind this is to explore other electronic phenomena at this smallest possible scale. Their findings may well prove very valuable to the rapid miniaturization of electronic components for computers, for example. 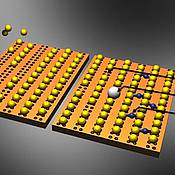 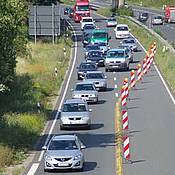