When Physicists Get Involved in Piano Tuning

A Würzburg physics professor publishes an article. Some English media take up the topic with snappy headlines, causing agitation in music circles: The story of a misunderstanding. 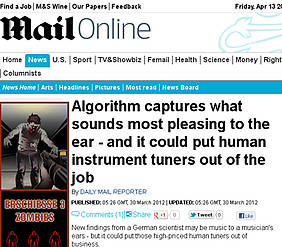 Haye Hinrichsen is a professor at the Institute of Physics of the University of Würzburg. And he is a family man. Because his children like to play the piano, the family buys an instrument. A piano tuner comes to give it a completely harmonious sound. "Being a physicist, I had the idea to measure the frequencies of the piano and to examine the sound spectra on this occasion," says Hinrichsen. In parallel, he looked into the topic of "piano tuning", encountering some interesting physics questions.

Piano tuners require keen hearing and technical skills in order to do their work properly. But there are also some simple electronic devices available, with which pianos can be set to the correct frequencies: These devices are small boxes, which are placed on the piano. If a string is struck, these devices recognize the note, indicating whether the frequency is too high or too low.

However, musicians do not have a particularly high opinion of these mini-computers: "To the musically trained ear, pianos tuned with such devices sound as if they were out of tune," explains Hinrichsen. The reason for this: The electronic gadgets can be used to put the fundamental frequencies of an instrument in tune, but not its overtones. However, it is these overtones that determine whether a sound is perceived as harmonious by the human ear.

In short: "If something sounds pleasant to our ear, the overtones of the involved fundamental frequencies match well together," says the Würzburg physicist. The professor thought that it should be possible to measure this effect by using a physical property called entropy, which is a measure of the disorder in a system.

Piano was virtually tuned on the computer

So Hinrichsen started analyzing the notes of the professionally tuned family piano on the computer. In simple terms, he proceeded as follows: He randomly changed the pitch of individual notes and re-calculated their total entropy. He assumed that decreasing entropy indicates "increasing order", which in turn means an improved harmony of the overtones.

He turned out to be right: After several computing cycles, the "virtual piano" was re-tuned like the professionally tuned family piano in Hinrichsen's house. The paterfamilias had developed an algorithm, i.e. a calculation procedure, which might in theory be used to improve electronic tuning devices.

Presentation led to a publication

Hinrichsen first presented his method to the public as a side note in conclusion of a presentation given as part of the lecture series "Physics on Saturdays". Later he drafted a more detailed paper in order to give a longer presentation at the Federal University of Rio Grande do Sul in Brazil, were he was working as an exchange lecturer. There, he was approached by the editor of a Brazilian magazine for physics teachers. This guy was obviously fascinated by the topic: He offered to publish a written version of the presentation in the magazine, which Hinrichsen accepted.

"I would never have dared to submit this study to a scientific journal, such as nature, because the research is not fully completed," says Hinrichsen. After all, I only used the notes of one single piano and my method has not yet been systematically examined. The media, however, were not much bothered by this when they found out about the issue: They treated the topic as if it were the result of "strict" scientific research.

Heated discussions on the Internet

The "Technology Review" of the Massachusetts Institute of Technology was first to take up the topic, using the headline "Algorithm Spells the End for Professional Musical Instrument Tuners". Other newspapers and journals followed suit, including the Wall Street Journal and the Daily Mail. Most of them repeated the claim that Hinrichsen's study spells doom for the profession of piano tuning.

It's no wonder that the articles in the Internet triggered a lot of comments and discussions. Naturally, there were also some nasty remarks, such as: "Only a university of poor scribblers can produce such 'research'." Hinrichsen also joined the discussions, explaining his motive. It was out of pure academic interest that he examined the physical difference between electronically and aurally tuned pianos.

How are things going to continue? Hinrichsen will not pursue the topic any further, since it was only a side interest of his. The actual research field of the theoretical physicist is statistical physics: "Generally speaking, I examine many-body systems which are activated, e.g. growth processes in the layered vapor deposition of molecules for technical applications." What about the entropy of piano notes? He will deal with this topic only at home – when his children hit the piano keys.

The article on piano tuning

Haye Hinrichsen posted his article "Entropy-Based Tuning of Musical Instruments" on his website in English and German language. There are also some links to newspaper articles relating to his study.