When Electrons Pair Up

When will physicists find the first superconductor that reveals its stunning qualities even at room temperature? It seems there is still a long way to go. Even so, researchers from the University of Würzburg were involved in a discovery which clearly points in one direction. 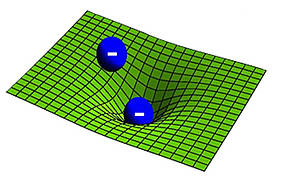 Within the field of physics, the so-called "superconductivity" belongs to an area of research which has been arousing high hopes for several decades. The effect that certain materials allow lossless current transport at low temperatures – i. e. without resistance – makes them highly attractive for many applications: as unimaginably fast computer chips, as magnets in suspension railways, as energy storages in power production or as lossless power networks.

However, superconductivity still occurs only at comparatively low temperatures: Minus 120 degrees Celcius is presently the highest value at which a material becomes a superconductor. But physicists are aiming at more: "We dream of finding a material that shows the desired properties even at room temperature," says Werner Hanke.

Searching was determined by coincidence

Until recently Hanke was Holder of the Chair for "Theoretical Physics I" and has now become Senior Professor at the University of Würzburg with special focus on theoretical solid state physics. Over the last decade he has concentrated on clarifying the mechanism that underlies high-temperature superconductivity. In cooperation with colleagues from Germany and the USA he has now made a significant step forward. The technical journal Nature Physics reported on the result.

"Up to now, the search for new superconductors has been determined by coincidence rather than by exact knowledge," Werner Hanke says. Identifying the most promising ones out of more than 100 known chemical elements with an almost countless number of possible combinations requires a principle and "this principle has been missing so far. But now, it is slowly becoming visible," says the physicist.

There are two classes of superconductors

The decisive effect, however, is the same in both cases: electrons join up as pairs and are thus capable of starting their travel through the conductor without resistance. "This is as if all cars on a highway were coupled so as to form one train. Since they all drive at the same speed, there is no traffic jam and they all reach their destination in a short time," explains Hanke. To do so, the electrons, which usually repel each other because they have the same electrical charge, must bond into pairs. Scientists have known about the exact process of electron pairing in low-temperature superconductors for about 50 years. However, the "glue" that bonds the electrons into pairs in high-temperature conductors was still unknown. And this is exactly the point where the work of Nature starts:

When voltage is applied to an ordinary conductor, the electrons move through the crystal lattice and thereby build up the current. In this process they collide again and again with the much larger ions, they are deflected and lose energy. This is the effect that lies behind the term "resistance" and it leads to considerable losses, e. g. in power networks. In a superconductor things are completely different: Here, the electrons join up into pairs and, so to say, point each other in the right direction. Similar to heavy balls causing depressions in a mattress, the electrons in a low-temperature superconductor deform the crystal lattice built by the ions, or more exactly: the field of force between the ions created by the attraction between negative electrons and positive ions. A particle drops quasi automatically into the depression left by the previous one.

As proven by the research team in the Nature article, the absence of resistance in high-temperature superconductors is effected by totally different forces, i. e. magnetic forces. These magnetic forces are based on the so-called spin, i.e. the sense of rotation in which these particles turn around their own axis.

This spin, which can be conceived as an extremely small magnet with a north and south pole, is also present in the ions which are placed at the intersection points of the superconductor's crystal lattice. If the direction of the spins or, respectively, of the tiny magnets is the same, you have a ferromagnet in the hand; if the directional sense changes from ion to ion, the material is anti-ferromagnetic – as it is with high-temperature superconductors.

Two vacancies in the lattice set the electron pairs in motion

According to the above, the individual levels of these superconducting crystals look like a chessboard – whereby the different orientations of the magnets represent the black and white fields. When physicists sporadically introduce atoms of other elements into the usually very regular magnetic lattice of these materials, the nice order is slightly disrupted. Some places in the magnetic lattice in the superconductor remain unoccupied, so that adjacent electrons, including their spin, can jump to the vacancy. "This, however, costs a lot of energy and creates resistance, as it results in electrons of the same magnetic orientation being placed next to each other which is energetically unfavorable," says Hanke.

This situation, however, changes abruptly, if two vacancies are located near each other so that the electrons jumping to these vacancies "pair": Disturbances in the chessboard pattern, i. e. in the magnetic lattice, caused by the first electron are then reversed by the second electron. The consequence is: Two neighboring vacancies – and thus the electrons jumping into these gaps and forming pairs – can, for example, be shifted to the right without causing disturbances in the magnetic "chessboard" lattice, so that charge can be transmitted without resistance. When, eventually, many of so-called "Cooper pairs" pool together and move at the same speed, a superconductor with its fascinating properties is generated.

Only the largest computers offer the required performance

What sounds comparatively simple in explanation is actually extremely complex in verification and requires the best high-capacity mainframe computer systems presently available on the market. "After all, we are not talking about single pairs of electrons," says Werner Hanke, "but about 1023 and more particles interacting with each other".

During simulation on the world's largest computer systems, Hanke and his colleagues in physics from the University of California and the Max-Planck-Institutes in Stuttgart and Dresden could demonstrate that it is actually the spins of the electrons that provide the "glue" which bonds them into pairs.

There is nothing to be said against superconduction at room temperature

One fact that particularly delights Werner Hanke is that physics is now in possession of a formula which allows the calculation of at least the approximate temperature for specific material combinations that make a regular conductor a superconductor. And possibly this even paves the way in the opposite direction: Using the desired temperature to search for a suitable combination of molecules.

At any rate, Werner Hanke is optimistic that it is only a matter of time until physicists hold the first superconductor in the hand, which is able to carry electrical current without resistance even at room temperature. Lastly, there are no signs that this effect ends at a certain temperature, for whatever reason.