Processes on the atomic scale can only be described accurately by using the laws of quantum mechanics. Physicists at the University of Würzburg have now succeeded for the first time to completely determine the state of such a quantum mechanical system in experiments. 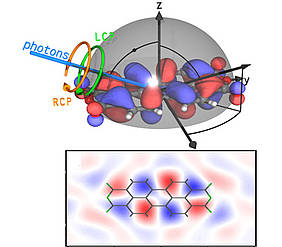 "It is a major step towards fully understanding the natural processes at the atomic scale." That is the conclusion a group of Würzburg experimental physicists draws in an article recently published in the renowned Nature Communications journal. Achim Schöll, associate professor at the Department of Experimental Physics VII at the University of Würzburg, and his team together with researchers from Jülich and Trieste have found a way to determine the spatial probability density of electrons in a molecule by experiment.

The laws of quantum mechanics

"One has to use the laws of quantum mechanics to describe the processes inside atoms or molecules," Achim Schöll explains. Standard school knowledge of electrons orbiting the atomic nucleus on precise orbits - like moon's orbit around Earth - is not very illuminating when it comes to understanding the world of quantum mechanics. There, particles are treated as complex wave functions; their properties are described by the waves' amplitude and phase.

However, it is extremely difficult to measure these two values by experiment: "It is in the nature of measuring that the phase information gets lost in the process," Schöll says. This is because most experiments measure intensities that correspond to the square of the wave function and thus to the spatial probability density. As a result, the phase information, that is the sign of this function, is lost.

This is unsatisfactory from the experimental physicists' point of view. After all, the phase is the decisive value in such fundamental processes as chemical bonding or superconductivity. Therefore, there has been intensive research to find a way to measure this value by experiment. A few methods for measuring the phase do exist already. "But they are not capable of determining the spatial distribution of the electrons at the same time," Schöll explains.

Schöll and his colleagues have now shown in an experiment that it is indeed possible to measure both phase and spatial probability density at the same time. They accomplished their goal using angle-resolved photoelectron spectroscopy with circular polarized light.

In photoelectron spectroscopy, physicists "bombard" the sample with UV light or X-rays to detach electrons from the sample's surface. The direction of emission and the kinetic energy of these electrons allow scientists to draw conclusions, for example, to the chemical composition and the electronic properties of the solid. Depending on the type of examination, they can also fit the beam of light with specific properties. "Circular polarized light" in this context means: The plane in which the light wave oscillates turns around on a circle – either clockwise or counter-clockwise.

"Depending on whether we are irradiating our molecule with right or left polarized light, we obtain different intensity distributions," Schöll explains. The difference of these two intensities, the so-called circular dichroism, then shows characteristic symmetries when changing the light's direction of incidence. This allows the phase of the underlying wave function to be derived. This experiment, too, does not return the phase directly. "But we can determine the symmetry of the phase and thus say where the value is positive and where negative," the physicist continues.