About two million people worldwide die of tuberculosis each year. There is an urgent need for new drugs and they will probably get easier to find in future – thanks to the new model MycPermCheck, which was developed at the University of Würzburg. 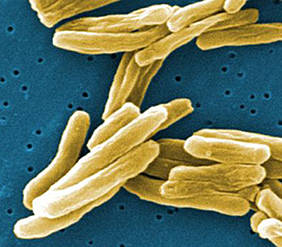 Tuberculosis is caused by a pathogen called Mycobacterium tuberculosis. If differs from many other types of bacteria in that it possesses a particularly thick cell wall. It is nearly impervious to foreign substances so that the pathogen is fairly drug-resistant.

"Many agents that could otherwise be highly effective fail to penetrate the thick cell wall," explains Professor Christoph Sotriffer of the Institute of Pharmacy at the University of Würzburg. Because of this barrier, many drugs do not reach their destination – the interior of the bacteria – or they arrive in such low concentrations as to be ineffective.

What gets agents through the cell wall?

Which conditions does an agent have to satisfy in order to pass easily through the cell wall of the tuberculosis pathogen? Previously, this question could not be answered by scientists. University of Würzburg pharmacologists and bioinformaticians have just come up with some first answers. Their results are published in the journal "Bioinformatics".

Christoph Sotriffer's colleagues, Benjamin Merget and David Zilian have examined 3815 substances effective against mycobacteria, comparing them with numerous ineffective or randomly selected substances. In their analyses, they identified several physico-chemical properties that are quite useful to predict whether or not a given molecule will be able to penetrate the cell wall of the pathogen. Such properties include the size of the hydrophobic area or the number of hydrogen bonding sites.

How effectiveness can be estimated

The scientists have developed the statistical model "MycPermCheck" on the basis of their findings: It can be used to estimate the probability of organic molecules with a relative molecular mass of up to approx. 500 being able to pass through the cell wall of mycobacteria and take effect in the bacterium. The model is available as a free web service on the home page of Sotriffer's study group.

"For the first time, MycPermCheck makes it possible to focus the search for agents against mycobacteria on such chemical compounds that have a high probability of being able to get inside the bacterium," the professor explains. This could be used to conduct virtual and experimental screenings more efficiently and in a more targeted way. The model can also be used to check whether any newly developed substances have the desired properties. "If this is not the case, you can try to achieve this by means of a targeted molecular design," says Sotriffer.

Why screenings are getting more effective

MycPermCheck is not a procedure with which the permeability of the bacterial cell wall can be calculated with exact precision, which point the developers emphasize. All users are advised to be aware of this. The model only increases the probability of picking out exactly the molecules that are suited to overcome the mycobacterial cell wall, when selecting from a great number of chemical compounds.

Professor Sotriffer: "Since several hundreds of thousands up to several millions of compounds are typically involved in a screening, it would already be a success if we were able to restrict the search for new agents to, say, the best ten percent of molecules that have a high probability of getting easily inside the bacterium. This would somewhat facilitate the difficult process of developing new drugs against tuberculosis."

The new findings were discovered at the Collaborative Research Center 630 (Recognition, Preparation and Functional Analysis of Agents against Infectious Diseases) of the University of Würzburg. The research is funded by the German Research Foundation.

Tuberculosis, also known as consumption, is the most common bacterial infectious disease worldwide. More than eight million people contract the disease each year, most of them in Sub-Saharan Africa, Asia and Eastern Europe. According to the Robert Koch Institute, between 4000 and 5000 new infections were annually reported in Germany in recent years.

The pathogens mainly attack the lungs. The consequences are constant coughs with sputum, weight loss and profuse night sweats. In serious cases, the sputum is blood-stained and underweight as well as severe anemia occur. If left untreated, the disease often leads to death.

Drugs that are able to cure tuberculosis have already been available since the middle of the 20th century. However, the treatment is complicated: It takes several months and requires a combination of at least four substances.  Furthermore, several strains of the pathogen have become resistant to the drugs. We don't have a lot of viable alternatives, since no new drugs have been developed for decades.