Treasure trove for research and therapy

They are termed adhesion G protein-coupled receptors. These receptors are involved in a wealth of vital functions in the body and therefore represent a promising target for drugs, yet relatively little is known about how they work. A new research unit is keen to change this. 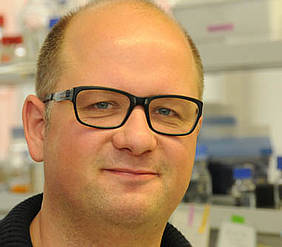 Seeing, smelling, tasting, when the heart beats, when hormones do their job – during all these processes, and many others, important tasks are undertaken by a certain class of receptors, known as G protein-coupled receptors, or GPCRs for short. Hundreds of them are encoded in the human genome and sit on the surface of cells, where they receive signals, which they transfer to the cell interior. One indication of their importance is the fact that around half of all clinically approved drugs target these receptors and, in doing so, treat ailments as varied as, for example, hypertension, asthma, and Parkinson’s disease. So, from a scientific perspective, these receptors are “a treasure trove” for the development of new therapeutics.

Adhesion GPCRs form a sub-group of this receptor class. They are the focus of a new research unit that has now been approved by the German Research Foundation (DFG). Its spokesperson is the Würzburg medic and neurobiologist Dr. Tobias Langenhan. The team includes scientists from the universities of Würzburg, Leipzig, Mainz, Erlangen-Nuremberg, and the Amsterdam Medical Center of the University of Amsterdam. By pooling their expertise in this field it is hoped that they will break new ground together. The DFG will be contributing around two million euros to fund the project over the next three years; an extension of a further three years is possible.

“What do they feel? How do they translate stimuli into a cellular response? And what happens when they are missing?” The scientists involved in the research unit want to find answers to these three questions over the next few years, explains Tobias Langenhan. There are 33 varieties of adhesion GPCRs in the human body. They are important control centers in the brain and in the immune system; they play a significant role in the development of the heart and blood vessels as well as in other processes. And, although they are among the oldest and largest surface proteins in humans, the way in which they work is still largely a mystery.

When receptors are missing

“We now know a little about what happens when they are missing in certain areas of the body,” says Langenhan. This can cause, for example, the development of Usher syndrome, a common congenital hearing and visual impairment. Or it may lead to a developmental disorder of the brain – “bilateral frontoparietal polymicrogyria”. Here the cortex folds itself into countless flat gyri; the afflicted suffer from seizures, movement disorders, and retarded mental development. Tumor cells, too, feature faulty adhesion GPCRs, though a causal relationship has yet to be proven in this case. “Fundamental principles of the way in which these receptors work are not yet understood,” says Langenhan. And this is where the work of the new research unit will begin.

Physiology, genetics, pharmacology, biochemistry, structural biology, and pathology: a wide variety of disciplines are represented in the new research unit and will all play their part in shedding light on the signaling behavior of adhesion GPCRs. Developing new drugs is not the primary objective. “What we do is basic research,” explains Tobias Langenhan. Not until the mechanisms in healthy people are understood can well-founded conclusions be drawn about the pathology, he says. That is not to say, however, that the scientists are completely ignoring any relevance to patients. Langenhan can well envisage the involvement of clinical partners in the potential second period of funding if it goes ahead.

A research unit is made up of a team of researchers working together on a research project, according to the DFG’s website. The objective behind supporting research units is to help provide the necessary staff and material resources for close collaboration, usually over six years. Research units often contribute to the establishment of new research directions. 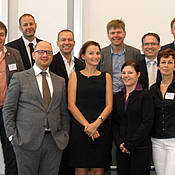