Organic food is booming – but was the much more expensive tomato really grown organically? This can be found out by means of an analytic technique that scientists from the university of Würzburg are working on. 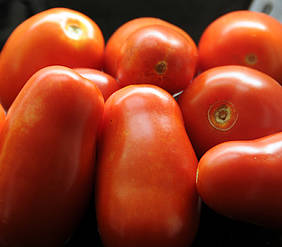 The demand for organic food is rising. It has almost tripled worldwide between 2002 and 2011, despite the fact that organic food is much more expensive than products grown the usual way. This has tempted some manufacturers and vendors to pass conventional goods off as organic – to the detriment of the consumer.

Current analytics is not good enough

Laboratory analyses are currently not completely capable of determining whether vegetables and fruit were really produced organically. The most reliable method at the moment is to examine the different forms (isotopes) of nitrogen in tomatoes, leek, or broccoli.

“However, it is not always possible to achieve a clear result with this method,” says food chemist Monika Hohmann, doctoral student at the University of Würzburg and at the Bavarian Health and Food Safety Authority (LGL). One of the reasons is that certain fertilisation methods in organic farming prevent a clear distinction in the isotope analysis between the nitrogen composition resulting from organic and conventional fertilisers.

Magnetic resonance spectra as an alternative

This is why Hohmann developed a different method with promising first results: Using the so-called magnetic resonance spectroscopy (NMR), she created a kind of fingerprint of the contents of tomatoes, and the interpretation of the results showed significant differences between the organically and conventionally grown tomato varieties “Mecano” and “Tastery”. This is reported by Hohmann and her dissertation supervisors Norbert Christoph, Helmut Wachter, and Ulrike Holzgrabe in the “Journal of Agricultural and Food Chemistry”.

The scientists are collaborating on this project with the Bavarian State Institute for Viticulture and Horticulture (LWG) in Veitshöchheim, where tomatoes in the greenhouse are grown organically and conventionally under strictly defined conditions. Samples are taken regularly, pureed, and centrifugalised. Finally, Hohmann measures a so-called 1H-NMR spectrum of them.

More tomato varieties to be included

“We are building up a data base from the spectra and this enabled us to detect the differences between the organically grown tomatoes and the conventional ones in the test setup,” Hohmann says. Up until now, only two tomato varieties were examined by the doctoral student. As a next step, she also wants to analyse other varieties, because it became obvious that differences between the varieties must be taken into account. Is this method also suitable for other fruit and vegetables? This is another question that will have to be clarified.

The scientists see their current results as a good starting point for developing a reliable method for a clear identification of organically produced tomatoes and other foods. Fraudsters passing off conventional fruit and vegetables as “organic” will not really like this.

Supervision and funding of the research

Monika Hohmann conducts her doctoral thesis at the Bavarian Health and Food Safety Authority (LGL) in Würzburg. Her supervisors are Norbert Christoph and Helmut Wachter. Her mentor at the University of Würzburg is Professor Ulrike Holzgrabe, who runs the Department of Pharmaceutical Chemistry. One of Holzgrabe’s areas of expertise is the detection of counterfeit medications using NMR.

The project at the LGL is funded by the Bavarian Ministry for Environment and Consumer Protection. 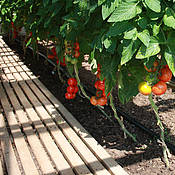 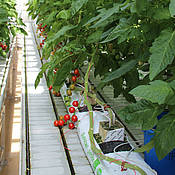