When light hits organic molecules, it triggers processes that are of considerable interest to scientists. But the individual steps of the reaction are very hard to identify. A study group at the University of Würzburg has now accomplished this task – with a sophisticated approach. 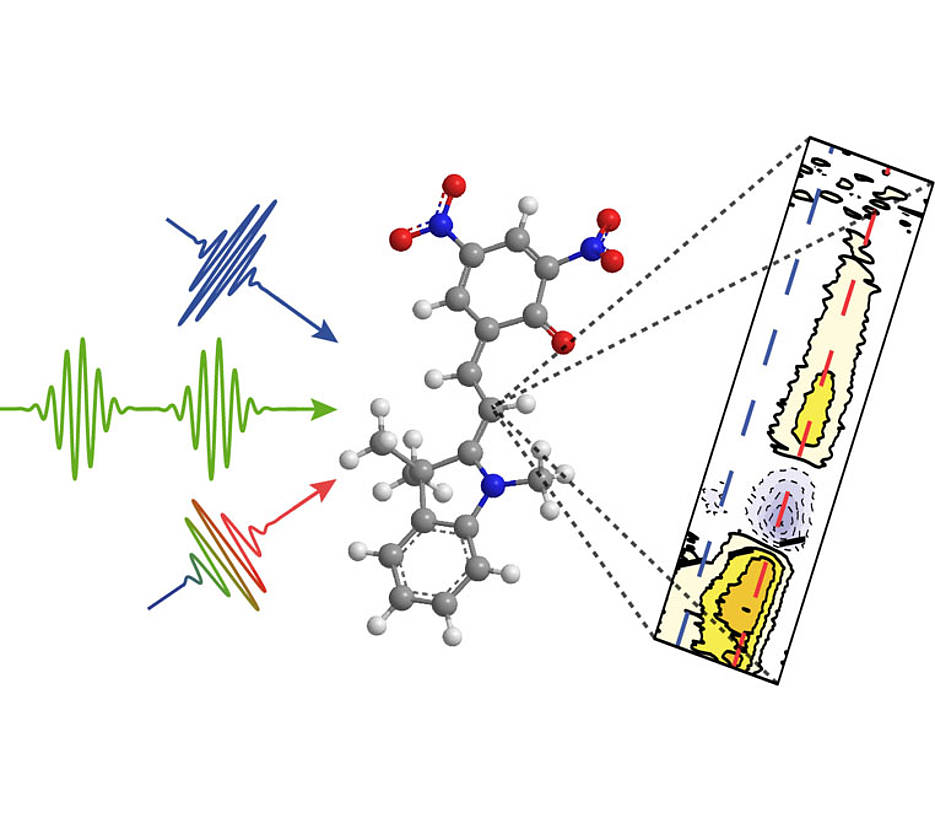 It might well be every chemist's dream: to actively control chemical reactions at a molecular level, to form or break chemical bonds at will so as to create tailored substances with special properties. As a precondition, however, this requires highly accurate knowledge of the numerous individual steps of which chemical reactions usually consist. In many areas, such knowledge is not yet available and neither is it easy to gain.

But now Stefan Rützel and some of his colleagues in the team of Professor Tobias Brixner, the head of the Department for Physical Chemistry I at the University of Würzburg, have developed a method that can be used to clearly identify at least the precursor states of chemical reactions. Their research is published in the current issue of the prestigious journal Physical Review Letters. Due to its special scientific importance, the editors even placed the Würzburg study as a research highlight in the Synopsis section of Physics (http://physics.aps.org).

Research on a femtosecond time scale

There are two requirements for unlocking the secret of chemical reactions on an atomic scale: Speed and skill. This is because photochemical reactions are inconceivably fast even though they often include the formation of several intermediary products, usually taking place within the space of only a few femtoseconds, i.e. a few millionths of one billionth of a second.

Nevertheless, it is possible for the scientists to shed "light" on the chemical processes, using ultrashort laser pulses emitted by femtosecond lasers. The molecules are sort of "scanned" with the laser light over a certain time period so that the dynamics of the reaction processes can be mapped. This widely used method is known as "pump probe spectroscopy".

A laser pulse in duplicate

"Pump probe spectroscopy uses a laser pulse to initiate a certain reaction. A second laser pulse then probes the dynamics induced by the first pulse," Tobias Brixner says, explaining how the method works. This enables you, among other things, to determine the characteristic lifetime of excited states and to identify competing reaction pathways.

However, this method still does not solve the following problem: "In a pump probe experiment, it is very difficult to identify the special state of a molecule from where the reaction starts," Brixner explains. This is because the laser pulse creates a multitude of such states.

Despite these difficulties, Stefan Rützel and some of his colleagues in Brixner's study group have now succeeded in clearly identifying such precursor states of reactions, using an ingenious experimental setup. For this purpose, they combined laser pulses of various wavelengths in the visible range with each other and studied their time-resolved correlation. In this way, they obtained information as to whether certain electronic transitions in the start and end states are quantum-mechanically linked to each other. In other words: Whether a certain electronic state is the precursor of another one.

In the experiment, the study group examined the molecule merocyanine, which exists in two distinct spatial arrangements, called conformations. After excitation with light, only one configuration gives rise to the formation of a cation, i.e. an ion with a positive charge, as the scientists were able to show. The method they developed thus enabled them to identify the special precursor that needs to be excited for the desired reaction to take place.

Promising method for application in photovoltaics and data processing

The researchers hope that this method of tracing reaction paths via electronic states might also be applied to the study of many other chemical processes. Potential areas of application include photovoltaic processes or data storage and data manipulation in optical storage media.

The study was funded by the German Research Foundation (DFG) within the Research Unit "Light-Induced Dynamics in Molecular Aggregates" (FOR 1809).