Top Awards for Chemistry and Physics

The news caused great excitement in the laboratories of chemist Holger Braunschweig and physicist Laurens Molenkamp: The two professors of the University of Würzburg have each been awarded 2.5 million euros in funds for their respective research by the European Research Council. 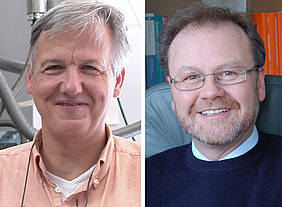 Braunschweig and Molenkamp have succeeded in the Europe-wide competition for the so-called "Advanced Grants", which are targeted for European top researchers with innovative projects. These grants are the most highly funded and prestigious awards made available for researchers by the European Union.

So far, four scientists of the University of Würzburg have been deemed worthy to receive such "Advanced Grants": biomedical scientist Martin Lohse in the first allocation round in 2008, biophysicist Rainer Hedrich in the subsequent year, now followed by Holger Braunschweig and Laurens Molenkamp.

Professor Holger Braunschweig conducts research on the chemical element boron at the Chemistry Center of the Würzburg Hubland Campus. This element poses a challenge for chemists: Boron has a large deficit of electrons, which it compensates for by readily forming bonds with other elements. This gives rise to some very unusual molecules.

Among other things, Professor Braunschweig intends to spend the 2.5 million euros from the European Research Council on generating so-called boron-containing conjugated compounds. "These substances exhibit very good properties for application in organic electronics and have great potential as molecular sensors," Professor Braunschweig says.

"Some of these substances are already in use in organic light emitting diodes and full-color displays," he explains. "We would like to synthesize some completely new types of these compounds by means of the borylene complexes that have been produced by us for the first time." This is the purpose of a new study group, consisting of five scientists.

In the laboratory of Professor Laurens Molenkamp, it has been achieved to discover the existence of the quantum spin Hall effect in 2007. This means that it is theoretically possible to transport and manipulate information without energy loss in advanced storage media. The application of this effect in the design of computers would have remarkable consequences: Such computers would be empowered to perform super-fast computations without heating up. This would cause great delight in the semiconductor industry, since the heating of the chip is still one of the limiting factors for the development of faster computers.

"We have found the new effect in so-called two-dimensional topological insulators," says Professor Molenkamp. These are ultra-thin sheets of material, which conduct the electrical current at the edges but not in the middle. Professor Molenkamp is going to spend his 2.5 million euro grant on expanding this system. He plans to also create three-dimensional topological insulators and to determine their properties.

"An exciting project," he says, "for we are sure to discover some surprising effects in this case as well." He expects that it should be possible to create and identify completely new particles on the surface of these materials. Five scientists at his department are assigned to undertake this task.