He is Spanish and has made the decision to conduct his research at the University of Würzburg over the next five years. Gustavo Fernández Huertas is going to develop intelligent materials at the Institute for Organic Chemistry. His project is funded by the Humboldt Foundation with a sizable amount of money. 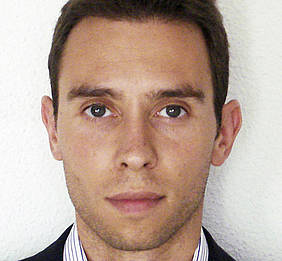 Molecules react with each other, e. g. through bonding or mutual repulsion, sometimes in such a purposeful way as if their activity were directed by a secret plan. Gustavo Fernández Huertas examines whether there is a systematics behind the "behavior" of certain molecules and, if so, how it is defined and can be used to control the respective molecules, focusing his research on oligomers, i.e. molecules consisting of several structurally similar or identical units.

1.65 million euros in funds for research on intelligent materials

For the next five years, he will work at the University of Würzburg at the Department for Organic Chemistry II chaired by Professor Frank Würthner. Gustavo Fernández Huertas is the winner of the Sofja Kovalevskaja Award, which has been granted for the fifth time by the Alexander von Humboldt Foundation this year. The award money is 1.65 million euros. He can use this money to set up and fund his own research team over the coming years.

Huertas intends to develop intelligent materials, the properties of which can be manipulated in a targeted way. These materials are envisioned to allow new applications in various areas, ranging from sensor technology to biomedicine. For this purpose, he examines how certain oligomers organize themselves in water and how they react to external factors, such as metal ions or light.

"It was the good reputation of Professor Frank Würthner's Department in particular and of the whole Faculty for Chemistry and Pharmacy that induced me to make a decision in favor of the University of Würzburg," says the Spanish scientist. He adds that Germany also offers much greater opportunities to young scientists than does his home country. As for the city of Würzburg, he didn't know it before, but thinks this town is "really great".

Life and career of Gustavo Fernández

Huertas Dr. Gustavo Fernández Huertas, born in Spain in 1979, studied chemistry at the Universidad Complutense de Madrid, where he received his doctorate in 2009. In 2006, he spent several months for a research project at Los Angeles, USA. Since Mai 2009, Fernandez has been studying at the University of Würzburg as a scholar of the Humboldt Foundation.

With the Sofja-Kovalevskaja award, the Alexander von Humboldt Foundation attracts top-level junior researchers from diverse disciplines to Germany for a research stay.

The award, which has been granted for the fifth time since 2002, is currently one of the highest endowed science awards in Germany, which provides unique conditions for scientific work: The young scientists are given the opportunity to work at an institute of their own choice without any administrative constraints for a period of five years, setting up their own junior research groups. The award money of up to 1.65 million euros comes from the Federal Ministry of Education and Research. Altogether, the foundation has granted this award to 15 researchers this year.