Together they make you ill

There are still gaps in our knowledge about the origin and course of complex diseases like multiple sclerosis. Now, researchers of the University of Würzburg have studied the interaction between two important factors – with a clear result. 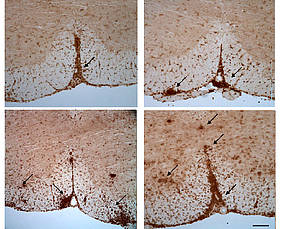 Chronic inflammatory diseases of the central nervous system (CNS) generally have a grave impact on the quality of life of the people concerned. Although past research has already made great progress in this area, the triggers and causes of this disease group, which also includes multiple sclerosis, have not been clearly identified yet. Among the suspects, two factors stand out: An increased susceptibility of the central nervous system to external attacks and a malfunctioning immune system.

Damage to nerve cells and a defective immune system

Previously, it was not fully understood to what extent these two factors influence each other. Now, researchers of the University of Würzburg have succeeded in shedding some light on this question. The lead researchers of this study were the medical scientist Heinz Wiendl, head of the clinical research group for multiple sclerosis and neuroimmunology, and the neurobiologist Rudolf Martini, head of the Würzburg study group for developmental neurobiology, at the Department of Neurology of the University of Würzburg. They have now published the result of their research in the American Journal of Pathology.

The researchers had to consider three variables in their study: Mice suffering from a disease that is similar to multiple sclerosis; genetic modifications causing damage to the myelin sheath of the nerve cells – which is a kind of insulation layer; and an immune system that does not work properly. “The question was how a predetermined genetic modification of the myelin – in combination with or without the dysregulation of the immune system – would affect the inflammation of the central nervous system,” explains Heinz Wiendl.

One factor alone is not sufficient

The result: If both factors – myelin damage and defective immune system – are present, the inflammatory response in the area of the central nervous system intensifies, leading to increased tissue damage. In contrast, dysfunctional immune cells by themselves do not cause any damage. “If these two genetic modifications come together in mice suffering from an experimental CNS inflammation, this causes an earlier onset and aggravated course of the disease,” says Heinz Wiendl. The scientists were able to show that in these cases an increased quantity of immune cells penetrates into the CNS, where they release pro-inflammatory mediators. At the same time, the indicators of nerve cell damage were most clearly visible here.

Translated to humans, this means: “Genetically determined modifications of the myelin formation or genetically determined dysregulations of the immune system as separate factors do not necessarily cause a disease manifestation,” explains Heinz Wiendl. But if these two factors come together and an inflammatory response is directed against the CNS on this basis, the inflammation progresses more violently with significantly more tissue damage than it would without these “predisposing” factors. According to the two scientists, it can be concluded from these findings that a combination of various disease-promoting aspects influences the onset of the disease or the intensity of relapses in the case of multiple sclerosis as well.