Once again, a highly endowed EU research grant goes to the University of Würzburg. Jürgen Groll conducts research on biomaterials which could usher in new therapeutic approaches in medicine. The European Union is going to fund his work with about two million euros over the coming five years. 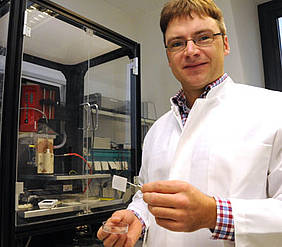 White, almost transparent and a bit similar in structure to a single layer of medical gauze: The newest development from the laboratories of Jürgen Groll looks rather inconspicuous. However, people in science, politics and industry have high expectations of the product, so much so that Jürgen Groll has just been awarded what is called an ERC Consolidator Grant by the European Research Council. This means that Professor Groll, who heads the Department for Functional Materials in Medicine and Dentistry, will receive about two million euros in funds for his research over the coming five years. The money is to be used for determining whether the tissue can fulfill its promise.

Alarm in the immune system

"Any artificial material used in the human body initially triggers an alarm in the immune system," says Groll, describing the problem that underlies his research. An inflammatory response will be initiated, which often abates after a few days, but is difficult to control. Sometimes, it is so violent as to cause a rejection reaction.  In this case, the implant must be removed as quickly as possible.  More frequently, the body tolerates the material, but encapsulates it with connective tissue. "What we need is a material that is more than just tolerated by the body.  It should best be populated by the body's own cells so that new tissue will be formed over time," Groll says. What the researchers are looking for are biomaterials capable of initiating healing processes while supporting the integration of the implant into the body. The new research project, called Design2Heal, is focused on implants that promote both processes.

Importance of the design

Previously, Groll and his associates already produced very fine fibers from biocompatible polymers, spinning them into nets, which were used as implants. However, the undesired reactions of the immune system could not be suppressed completely. Meanwhile, the latest research results suggest that the shape and geometry of the material are decisive in triggering this reaction: "Recent studies show that highly ordered structures with pores ranging in size between 30 and 60 micrometers are much less likely to cause a strong inflammatory response or encapsulation," says Groll. Quite the contrary: The immune cells relevant in this context, the so-called macrophages, even release soothing signals, after which the body starts the healing process and new blood vessels grow into the implant. Why is this the case? As of yet, the scientists have no clear explanation for this phenomenon.

Over the coming five years, Groll is going to fabricate implants with this property in his laboratories. By means of a new technique, which is unique across Europe, he "spins" fine nets with suitably sized pores. In addition, he deposits special substances on their surface, which attract specific cells in the body – e.g. stem cells – and offer them an anchor for attachment. In this way, new tissue is formed in the body while the implant is gradually degraded and removed.

The technique used in this process is called Melt Electrospinning Writing or simply MEW. Much like in an inkjet printer, some liquid is directed through a nozzle and spread on a substrate. The only difference is that in this case the liquid is a polymer melt, the nozzle is extremely small and there is an electrode placed opposite the nozzle with a high voltage between nozzle and electrode. Due to the voltage, the melt is stretched into a fine jet; since the position of the collector plate, where the jet arrives, can be adjusted via a computer controlled system, the scientists can draw any desired pattern. "With this set-up, we can even create small tubular structures, which might be of interest, for instance, in vascular surgery," says Groll. The polymers used in Würzburg are degradable and approved for medical application. In this respect, there is nothing to prevent a quick transition to clinical use.

A wide range of possible applications

Speaking of applications: According to Groll, the new material can be used in various ways. It might essentially be used to coat the surface of any implant in order to prevent the dreaded rejection reaction. But it could also be used as an implant itself, e.g. as a net that closes a rupture of the groin and initiates the formation of new native tissue.

However, the research project is not focused on the development of a specific medical product. "We conduct basic research and are concerned with general principles," Groll explains. Where the results will lead is uncertain. "Maybe our research will open up completely new perspectives nobody has thought of as yet."