Independent whether we consider grapevines in the vineyard or tomatoes in the greenhouse: how well plants are being supplied with water can be viewed by an innovative magnetic probe that is simply clamped to the leaves. This novel technology promises water savings and reduced soil salination. 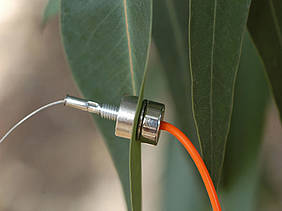 The probe has been developed by a team headed by Professor Ulrich Zimmermann from the Biocenter at the University of Würzburg in close mutual discussions with Dr. Dirk Zimmermann and Professor Ernst Bamberg from the Max Planck Institute of Biophysics (Frankfurt/Main). Now, after two and a half years of work, the technology is close to reaching the application stage.

Tests are still ongoing on the prototype of the probe, but interested farmers and horticulturalists are already gathering in numbers outside Zimmermann’s door: “Interest in our technology is huge in Israel, Spain, Australia and other regions where farming is not possible without irrigation,” says the professor.

The probe may even be an exciting prospect for the wine-growing industry in Germany given that climate change and ever-drier summers mean that here too grapevine growers are already irrigating their vineyards to ensure high yield and high quality products.

How the magnetic probe works

The probe consists of two small cylindrical magnets being roughly as thick as a pencil. They are clamped on a leaf of a plant from above and below; the magnetic force can be adjusted with a setscrew. This ensures that even the more delicate leaves can withstand the pressure exerted by the magnets.

One of the magnets contains a pressure-sensitive chip. If the leaf has been well supplied with water and is therefore plump and firm, the chip registers little pressure. As soon as the leaf looses water, the pressure rises. The pressure signals are monitored by a cable-connected transmitter having roughly the size of a cellular phone, which can be attached, for example, to the branches of the plant. This sends the pressure signals to a control unit, which stores the data and feeds it into the Internet. The telemetric data transfer to the Internet has been developed by NTBB Systemtechnik GmbH in Zeuthen near Berlin.

Ulrich Zimmermann can then see on the monitor in his office, in real time, what the situation is regarding the water supply of the little olive tree attached to the probe on the next floor down in the laboratory. But he also sees simultaneously the water status of plants growing in three plantations in Israel (oranges, olives and bananas), where the system is also currently undergoing tests.

Thirsty plants therefore send their emergency calls directly to the people concerned – to their laptop or cellular phone. In the case of water shortage growers and gardeners can then immediately turn on irrigation and see online when the plants have received sufficient water. The distress signals from the field can also be used for the automated remote irrigation control of plants.

Advantages of the magnetic probe

According to Zimmermann, the magnetic probe allows a continuous, precise, and highly sensitive measurement of the water supply to plant leaves, even out in the open field, for the first time ever. To date, irrigation technology has mostly used soil sensors, if anything, which determine the moisture content of the soil. “However, this does usually not reflect the conditions in the plant,” explains Zimmermann.

The professor lists a few other advantages, such as the fact that any layperson can clamp the probe without causing damage to the leaves. The probe is designed to be used for one vegetation period, with only three to four probes needed per hectare out in the field or inside the greenhouse. The objective is a measuring system that does not entail excessively high operating costs for users. “With systematic use, the investment should pay for itself within two years,” says Zimmermann.

Agricultural businesses that use the magnetic probe for irrigation monitoring will find that water consumption can easily be reduced by around 30 percent, predicts the Würzburg professor.

For cultivation out in the open field in hot and dry countries, Zimmermann also expects a further positive consequence: needs-oriented irrigation, as is feasible with the probe, ought to counteract salination of the soil there. This damaging effect occurs when soil constantly loses large quantities of water through evaporation – the salts dissolved in the water are precipitated on the surface. “However, if plants are only given as much water as they can absorb, this evaporation of water from soil is minimized,” explains Zimmermann.

Ministry supports foundation of a company

Zimmermann sees huge market potential in the probe. So, he and his colleagues have decided to found a company that will offer needs-oriented irrigation monitoring devices as a service to farmers and horticulturalists.

The German Federal Ministry of Economics has granted the Würzburg founders EUR 100,000 in funding for this purpose from the development program EXIST. With this cash injection the team can now devise a business plan and press ahead with founding the company. The ministry has also provided support, through the PRO-INNO program, for the development of the prototype of the magnetic probe.

Members of the founding team

Alongside Professor Zimmermann, the founding team includes: doctoral student in biology Simon Rüger, biotechnologist Dr. Aihua Zhou, and business consultant Michael Gallena. The project is being supported by the Research and Innovation Service Center (SFI) of the University of Würzburg.

ZIM Plant Technology is the name given to the project. ZIM is an acronym for “Zimmermann Irrigation Monitoring”. 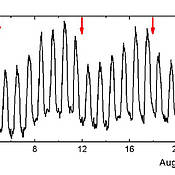