Physicists from the University of Würzburg have managed to use an electric current to emit light from a nanoantenna only 250 nanometres in size. They present their breakthrough in the magazine "Nature Photonics". 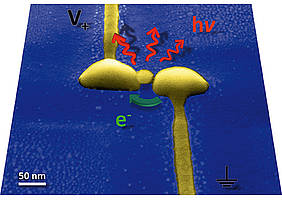 Electrically driven miniature light sources are of potential use, for example, in smartphone displays, where the integration of 3D techniques will require pixel densities far beyond nowadays standards. Nano light sources could also be used in computer chips for low-loss data exchange between processor cores at the speed of light.

In the magazine "Nature Photonics" Würzburg physicists now describe their pioneering experiments which demonstrate how light is generated using an electrically driven nanoantenna made of gold. The antenna was developed by Professor Bert Hecht's team in cooperation with the Department of Technical Physics.

How do optical antennas work? "In fact, they work in a similar way as their much larger radio-frequency counterparts," Bert Hecht explains: There an AC voltage is applied that causes electrons in the antenna to oscillate. As a result, the antenna emits electromagnetic waves of a well-defined wavelength and spatial pattern determined by the antenna geometry. However, in the optical frequency regime the alternating current concept cannot be applied anymore.

It’s a quantum mechanical effect that led to the Würzburg breakthrough. The optical antenna they developed has two arms each fitted with a contact wire, their ends almost touching. The tiny space between the arms is filled with a gold nanoparticle which touches the one arm and leaves a gap of about one nanometre to the other arm. The gap is so small that electrons can bridge it due to the quantum mechanical tunnel effect when applying voltage, directly causing oscillations at optical frequencies.

Colour changes according to the length of the antenna arms

The antenna thus constructed emits electromagnetic waves in the form of visible light. The colour of the light is determined by the length of the antenna arms. "This enables us to build extremely compact light sources and we can tune their properties simply by adjusting the antenna geometry," says Hecht.

While the feasibility of building such antennas has now been demonstrated it is still a long way to go until they are ready for application in technical devices. The physicists have to further improve the efficiency: Too much power is lost as heat when operating the optical antenna. For another,the durability of the gold nanostructure has to be improved in order to expand its operation time beyond a few hours. 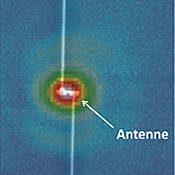