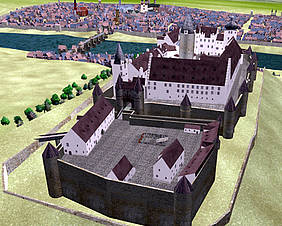 Librarians and information scientists of Wuerzburg University set out for a major virtual reality project: on the basis of a wooden model of the historical city centre of Wuerzburg, today preserved in the Fürstenbaumuseum of Wuerzburg’s Marienberg Fortress, the cityscape of 1525 is redesigned into a virtual 3D-world, thus allowing animations, visualizations and architectural simulations: http://stadtmodell.informatik.uni-wuerzburg.de

On www.franconica-online.de computer users may now experience medieval Wuerzburg more graphically, its sea of little timbered houses encircled by defiant city walls, its high-towering churches, and the citadel dominating the western bank of the Main River. Two guided tours, a virtual flight around Marienberg Fortress and a voyage from the bridge “Alte Mainbruecke” to the Cathedral St. Kilian, allow a closer look at the most prominent sights of the city.

Currently, the project team is working on linking text and image sources (especially the reports of the Chroniclers Lorenz Fries and Martin Cronthal about the events in the city during the Peasants’ Revolt of 1525) to the 3D-models. Electronic city models of other periods, the baroque transformation of Wuerzburg in the 18th century, the industrialisation of the 19th Century, the devastations of 1945, and today’s Wuerzburg, are in the pipeline. Funds permitting, “Virtual Wuerzburg” might develop into a true historical city information system and an alternative way to finding historical documents of Wuerzburg’s changing history.