The Venus flytrap: from prey to predator

The carnivorous Venus flytrap recognizes its prey by taste and its cells share similarities with the human intestine. By exploiting common plant defense strategies, the flytrap has completely turned the table; it seeks out and consumes prey rather than being the meal itself. 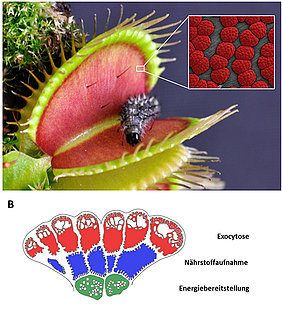 The Venus flytrap (Dionaea muscipula) feeds on insects. It attracts a meal with its flower-like reddish color and ripe fruity smell on leaves converted to ambush traps. Seeking nectar, an insect will inevitably touch the highly sensitive sensory hairs on the leaves. This causes the trap to snap shut at lightning speed, imprisoning the prey.

Dionaea must then decide how much energy to invest in the capture and consumption. It estimates the size of the prey by counting how often it touches the sensory hairs. Two touches and Dionaea activates a special hormone. With five or more stimuli, the plant produces enzymes and transport proteins for digesting and absorbing the prey.

But what genes make the trap a trap? How did the plant switch to animal food during evolution? Professors Rainer Hedrich (Biophysics) and Jörg Schultz (Bioinformatics) and their teams from Julius-Maximilians-Universität Würzburg (JMU) in Bavaria, Germany, have unraveled this mystery. Their results are published in the scientific journal "Genome Research".

The flytrap is a leaf with root function

Surprisingly, the analyses revealed that the Dionaea trap not only had active genes typical of leaves, but also possessed genes normally specific to roots. But how can the trap be both a leaf and root at the same time? The scientists found the answer in the numerous glands that densely populate the trap surface.

The dome-shaped glands are made up of three cellular layers. The outer layer consists of cells responsible for excreting digestive enzymes. The second layer features cells whose envelopes are folded multiple times – similar structures that increase the surface area are found in the intestine of humans. "We assume that this is the place where nutrient uptake takes place," Hedrich supposes.

The cells of the third layer are densely packed with oil bodies. They could supply the fat for the energy used by the two outer cell layers – an idea supported by the gene activation pattern in traps that caught insects.

Insects are protected by a chitin exoskeleton. The Venus flytrap cracks this protective shell using special digestion enzymes that are produced once the sensory hairs register a stimulus. It will ebb away if the hairs are not further stimulated. The researchers found that with repeated stimulation (whether by a trapped insect or experimenter), enzyme production increases for several days.

But what if the prey dies soon after capture? This is not a problem for the Venus flytrap: the presence of a chitin receptor assures continued production of enzymes – the plant is capable of "tasting" the insect. The chitin boosts the enzyme production even more than a mechanical stimulus.

From defending to attacking

So, the presence of chitin tells the Venus flytrap that food is available, causing the digestive juices to flow. "Contact with chitin normally means danger for a plant – insects that will eat it," Hedrich explains. Ordinarily, this triggers defense mechanisms.

"In the Venus flytrap these defensive processes have been reprogrammed during evolution. The plant now uses them to eat insects," the professor further adds. The JMU researchers came to this conclusion by looking at thale cress (Arabidopsis thaliana), a non-carnivorous plant, for exactly the same pattern of gene activation as found in the Venus flytrap when it catches its prey.

The greatest match is found when thale cress is injured mechanically or when insects feed on it. The physiological responses too are similar. Injuring thale cress generates an electrical impulse that activates an important defense hormone called jasmonate. Touching the Venus flytrap's sensory hairs activates the same hormone.

From that point on, the signal paths differ. To fend off insects, the hormone starts the production of substances that poison or deter insects, or make the leaves hard to digest. In this carnivorous plant, the hormone initiates the digestion of the meal and uptake of its nutrients.

"We have thus achieved our goal of decoding the molecular origin of the Venus flytrap's carnivorous way of living," Hedrich reports with pleasure. He has pursued this goal since 2010 within the scope of the "Carnivorom" project funded by the European Union (EU) to the tune of 2.5 million euros (www.carnivorom.org).

"We are now going to compare the genome of carnivorous plants, their protocarnivorous precursors such as Plumbago to plants in which carnivorous and non-carnivorous development stages alternate such as in Triphyophyllum or the tropical liana Ancistrocladus, which has gone on to abandon the carnivorous lifestyle. Ultimately, we want to know what equipment a plants needs to eat and live off animals."