The skin as a window to the brain

Diagnosing Parkinson's disease is difficult, especially in the early stage of the disease. Neurologists of the University Hospital of Würzburg have now shown a way that could be beneficial to both early diagnosis and research. They found the key in the patients' skin. 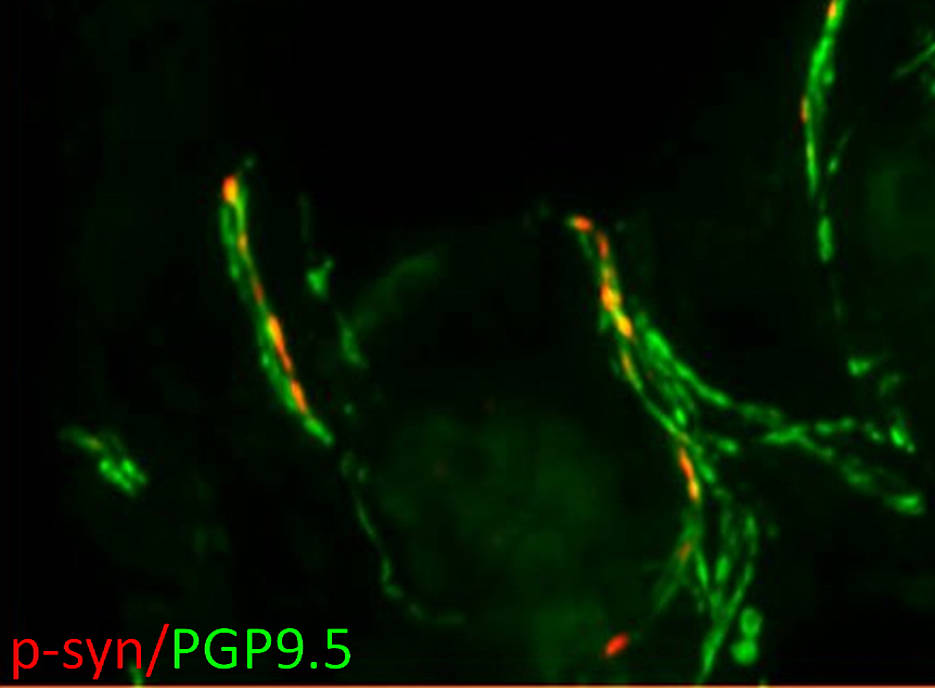 A definite diagnosis is only possible post-mortem. Only then can pathologists examine the brain for typical depositions of the protein alpha-synuclein in the nerve cells of specific brain regions and thus reliably diagnose Parkinson's disease (PD).

Before that, physicians have to rely on a number of typical symptoms which are indicative of Parkinson's disease. The diagnosis is obvious in patients who move slowly, have a limited range of motion, stiff muscles and tremors at rest or have difficulty keeping their balance. But these symptoms only occur in the advanced stage of the disease; until then, the diagnosis remains extremely uncertain.

This could change in the foreseeable future: Neurologists from Würzburg found out that in about half of the PD patients the alpha-synuclein depositions are also detectable in the small nerve fibres of the skin. Since the skin is much easier to access than the brain, Professor Claudia Sommer and her team are hopeful to reliably diagnose the disease pre-mortem in the future by means of a simple skin biopsy. And what is more, the scientists believe that this will allow them to investigate the disease mechanism in the skin, which is still largely unknown. The results of the study have just been published in the magazine Acta Neuropathologica.

31 PD patients from the neurological department of the University Hospital of Würzburg and from the Paracelsus Elena Hospital in Kassel and 35 healthy controls participated in the study. Small skin biopsies were taken from all participants at the lower and upper leg, index finger and back. Additionally, the scientists conducted a number of further examinations to exclude other causes of nerve damage.

"We identified phosphorylated alpha-synuclein in the histological samples of 16 PD patients but in none of the controls," first-time author Kathrin Doppler sums up the study results. In other words: Whereas about every second PD patient exhibited the typical depositions, they did not occur in any of the healthy controls.

The scientists made another finding that is interesting for an early diagnosis: "Alpha-synuclein occurred equally in patients in early and late stages of the disease," Kathrin Doppler explains. She pointed out that this was unrelated to the course of the disease.

Identical changes in the skin and in the brain

The scientists most frequently encountered alpha-synuclein in skin biopsies from the back of patients. They also registered a decreased number of nerve fibres in patients with Parkinson's disease compared to the healthy controls. They reported that the types of nerve fibres affected were similar to those in the brain of PD patients. The scientists take this as a promising sign that "the changes in the skin of PD patients are reflective of features of brain pathology, which could render it a useful tool for pathogenetic studies".

In a follow-up study, the Würzburg scientists are characterising the cutaneous alpha-synuclein depositions in greater detail to learn more about their effects on the function and survival of nerve fibres. In doing so, they hope to shed more light on the disease mechanism which is still largely unknown.

The work was funded by the First-time Applicant Program of the Interdisciplinary Center for Clinical Research (IZKF) of the University Hospital of Würzburg.