The rubber hand that you feel is yours

What does the brain do when it receives information from they eye that conflicts with sensory evidence from the hand? Neurologists from Würzburg have investigated this question by means of a classical experiment. The result: The brain takes the easy route. 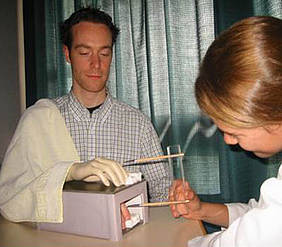 It seems rather weird: You see an artificial hand lying on a table in front of you knowing exactly it isn't your real hand. Nevertheless, you feel as though it actually belongs to your body. Your brain delivers the illusion that the artificial hand is a part of your body – even though you know for a fact that it is not.

This is the term used in literature to refer to the experiment. In 1998, Matthew Botvinick and Jonathan Cohen, two psychiatrists from the University of Pittsburgh, carried out the experiment for the first time, causing quite a stir with their results.

Usually, the experiment is conducted as follows: Participants place their right hand on a table. The scientists hide the hand from view and place a realistically looking rubber hand next to it. They then use a brush to simultaneously stroke the (hidden) real hand and the (visible) artificial hand. After a short time, most participants have the illusion that the rubber hand is a part of their body.

Publication in the Journal of Cognitive Neuroscience

To find out what is happening in the participants' brains and which parts of the brain are involved in generating the illusion, scientists of the University of Würzburg teamed up with their colleagues in Leipzig and London. Their work will soon be published in the Journal of Cognitive Neuroscience; the online version is already available.

"We studied how the brain processes and resolves conflicting multisensory evidence," says Dr. Daniel Zeller, lead author of the new study and neurologist at the Department of Neurology and at the polyclinic of the University of Würzburg. Then of course the brain is facing a contradiction: receiving tactile stimulation from the real hand while seeing the brushstrokes being applied to the dummy hand, it tries to reconcile these two sensory perceptions. The scientists were mainly interested in which regions of the cerebral cortex generate the wrong impression and how they do this.

The rubber hand experiment saw participants being exposed to three different scenarios: The first scenario was similar to the original experimental setting with the participants' own hand hidden and a dummy hand placed in a comparable position, applying simultaneous brushstrokes. In the second scenario, the artificial hand was flipped 180° with an otherwise identical setting. In this case, the palm of the dummy hand was facing upward with the palm of the real hand facing downward. Here, too, two brushes were used. Setting three did not involve the artificial hand at all. In this experiment, only the participants' real hand was stroked with the brush without the illusionary perception of the rubber hand.

The researchers used an electroencephalogram (EEG) to record the participants' brainwaves during the experiments to find out which areas showed increased activity. This allowed them to draw conclusions as to how the human brain processes conflicting multisensory information.

"Our results are compatible with the so-called 'predictive coding' concept of multisensory integration," Zeller says. What does that mean? Simply put, it answers the question of how the brain reconciles different sensory information, visual and tactile for example, based on experiences and expectations. Perceptions that occur synchronously are preferably perceived as one single event by the brain.

"With regard to the rubber hand illusion, the brain might arrive at this conclusion: The visible hand is made of rubber and is touched in the same rhythm as my one hand. Even though plausible, this explanation is very unlikely," the neurologist explains. The competing theory in contrast says: "I am feeling the brushstrokes on the visible hand – therefore it is my own hand." This theory is much simpler, but it disagrees with the perceived arm position.

The brain changes its attention allocation

The predictive coding approach could reconcile these conflicting theories as follows: The brain readjusts its sensory precision control thereby varying its attention allocation. Reducing the somatosensory input (i.e. the perceived arm position) in this way resolves the contradiction between the information transmitted by the eye and that of the arm position.

The EEG signals recorded from the participants backed this theory: When participants said they felt the rubber hand illusion, the EEG showed characteristic patterns. These patterns can be interpreted so that the brain actively suppresses distracting somatosensory information when confronted with two conflicting theories.