The power of expectations

"You are much less sensitive to pain than others!" People who are told so endure pain better afterwards. About the impact of expectations which is studied at the Institute of Psychology. 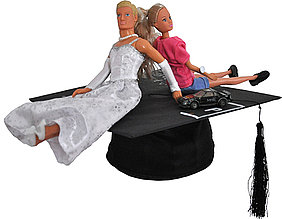 A man in a dress, a woman dressed up like a man: This picture plays on society's expectations for the sexes. Such expectations are always powerful and may have a negative impact. If girls are regularly told that they are bad at maths, they will actual get worse in the subject. (Picture: Katharina Schwarz)

Expectations have a lot of power over people as is evidenced by the placebo effect: Patients get pills that have no active ingredient. But the patients are not aware of that. Firmly believing that they are taking an effective drug, they actually get better afterwards. Only their expectations were at play here.

"The placebo effect often works quite well when treating pain and depression," says Dr. Katharina Schwarz from the Institute of Psychology at the Julius-Maximilians-Universität Würzburg (JMU) in Bavaria, Germany. The mere expectation of getting a drug can alleviate symptoms and make you feel better: "And those are not just the patient's subjective sensations, it can actually be measured physiologically."

Katharina Schwarz generally studies how expectations influence perception and behaviour. Pain was also a central theme of her doctoral thesis which she completed at the University Medical Center Hamburg-Eppendorf in 2015. One conclusion she draws: If men are told that they are more or less sensitive to pain than women, they will perceive pain differently afterwards.

The experimental set-up: Participants in the experiment were administered different heat stimuli trough a band on their forearm. They were asked to rate the pain they felt on a scale from "no pain" to "unbearable".

On the next day of the experiment, a leaflet casually informed the men that they were more or less sensitive to pain than women. The information was backed by evolutionary psychological reasons, respectively. One study group was told that men can endure pain particularly well given their ancient role as hunters, for example. The other group read that women had a higher pain threshold because they have to endure the pain of giving birth.

Afterwards, the experiment was repeated. Now, the participants who thought that men were less sensitive rated the pain as being much less intense than on the previous day. Those, however, who had learnt that women have a higher pain tolerance now considered themselves more sensitive to pain than before.

Review article published on the subject

In a review article in "Trends in Cognitive Sciences" Katharina Schwarz shows how far human expectations can go. For the first time, she has put examples from various disciplines into context: "Neurosciences, psychology and educational science all study expectations and their impacts. But the individual disciplines hardly exchange their knowledge and I would like to change that."

Her goal: "I want to increase the awareness, especially of students, for these mechanisms and in particular for the ones that have a negative impact on people." She believes that this is of practical significance for both therapies and psychological research: "Scientists, too, have certain expectations in their work. If they incorporate these expectations into the test design and influence test participants accordingly – albeit entirely in good faith – results can be distorted."

Katharina Schwarz wants to advance this field of research at the University of Würzburg and focus on non-explicit expectation processes, too. These are expectations people have but are not consciously aware of.

Since autumn 2015, Katharina Schwarz has researched as a postdoc at the department of JMU Professor of Psychology, Wilfried Kunde. Born in Würzburg, she grew up and studied biology here. After graduating, she joined the Cognitive Neurosciences at the University Medical Center Hamburg-Eppendorf to do her PhD.

Link to the web site of Katharina Schwarz