The point of pointing

Everyone probably knows the following situation: You point your finger at something to show it to someone else. But the other person does not get it, sees neither the hedgehog by the road, nor a certain constellation in the sky. Psychologists from the University of Würzburg have found out why pointing gestures are frequently misunderstood. 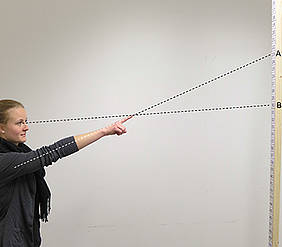 Pointing gestures are an important part of interpersonal communication. But communication by pointing reaches its limits once you are pointing at inconspicuous objects at a distance. In that case, observers of pointing gestures frequently do not understand what the other person is pointing at. Psychologist Oliver Herbort from the University of Würzburg has conducted an experiment to investigate the reasons of this phenomenon. He reports his results in the "Journal of Experimental Psychology: Human Perception and Performance".

"The geometric rules that describe how a person is pointing at something differ from the rules used to interpret the pointing gesture," says Herbort. The persons pointing bring their fingertip close to the object to be pointed out – from their perspective. Eye, fingertip and object are located on about the same line.

Observers of the message, in contrast, include the pointing person into the picture. They extend the line formed by the pointer's shoulder, arm and index finger in the direction of pointing (see graphic). "As a result, observers frequently look much too high," Herbort explains.

"We frequently point in everyday situations from an early age on. However, hardly anybody seems to know that pointing gestures are systematically misinterpreted," Herbort further. These misunderstandings frequently have to be clarified verbally.

The interpretation of the gestures frequently tended to be too high as can be demonstrated in a simple test. Two participants alternately point at a vertical number line. Both partners are asked to only point at the number at which the other has pointed just before. Ideally, both persons will always point at the same number. But the test persons always pointed at higher positions. "Basically, the target of the pointing gestures is always estimated as higher than intended by the pointer," says Herbort.

For non-scientific everyday use, the implication thus is: If you use pointing gestures, don't be surprised if they are not understood. At the same time, you shouldn't be too sure that you interpreted the pointing gestures of others correctly – so in case of doubt, ask the other person.

Video of two participants who alternately try to point at the position at which the other person has pointed just before.

By clicking the picture you are enterering the website youtube.com and you are leaving the Website of the Würzburg University. 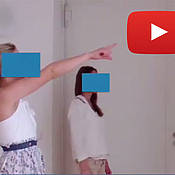