The link between circadian clock and stress

There are two phenomena which basically determine the lives of all organisms: the continuous day-and-night cycle and the occurrence of sudden events. To respond adequately to this, organisms have developed special mechanisms that have one surprising thing in common. 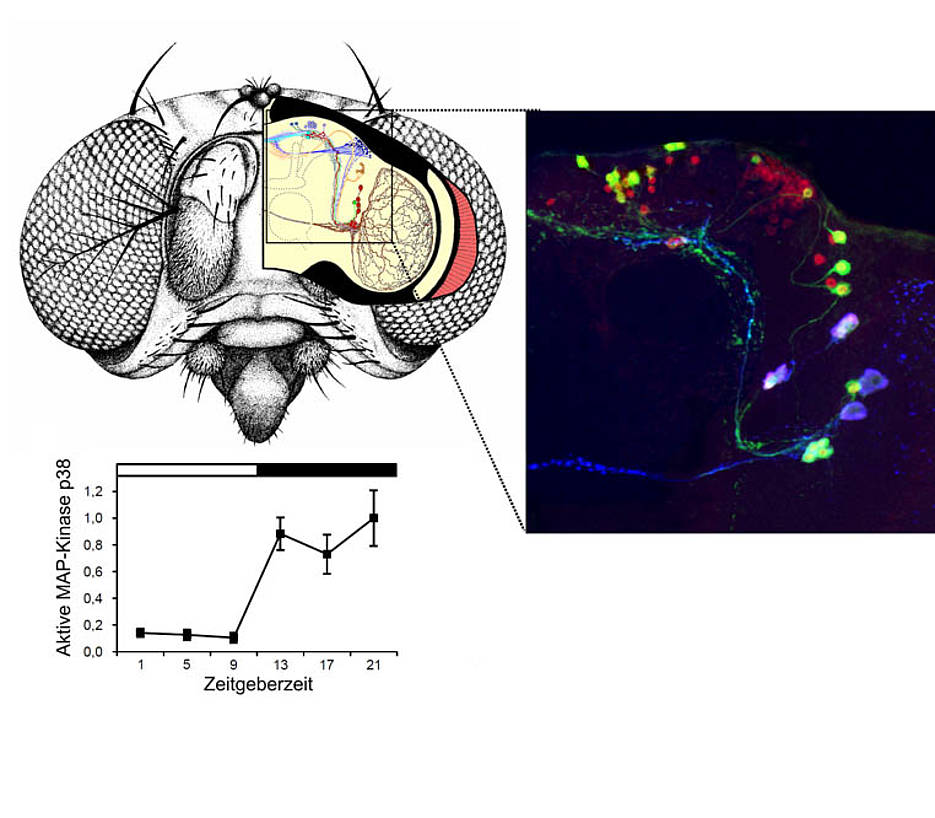 The continuous 24-hour day-and-night cycle and the unexpected occurrence of sudden events: These two factors determine the lives of nearly all organisms on Earth: from protozoa to humans. Both require totally different responses. This has led to the development of different response patterns with the associated genetic bases in the course of evolution. On the one hand, so-called circadian clocks prepare the organism for the regularly recurring requirements of everyday life. On the other hand, the stress system is activated whenever an unexpected result calls for a quick response.

But despite these differences, recent research results have shown that these systems also share characteristics which link them. Many people probably know this from their own experience: They respond differently to stress depending on the time of day. On the other hand, high stress levels disturb their day-and-night rhythm and affects sleep.

The molecular and cellular details of these common characteristics have been unknown until recently. Scientists of the University of Würzburg have now successfully identified one of these connecting elements. Chronobiologist Charlotte Helfrich-Förster and her team pinpointed a special enzyme, the p38 mitogen-activated protein kinase, which plays a major role in both signal pathways. The scientists present their work in the PLOS Genetics journal.

"p38 has been known to be a key component of the immune and stress signal pathways for quite some time. We have now demonstrated for the first time that the enzyme also forms part of the central circadian clock where it assumes key functions," Charlotte Helfrich-Förster interprets the result of her study. She is a professor at the Department of Neurobiology and Genetics at the University of Würzburg and has specialised in chronobiology which studies the effect of time on living systems. She is also the spokeswoman of the collaborative research centre "Insect timing: mechanisms, plasticity and interactions" which was set up in early 2013 to study how circadian clocks work in animals, among others.

The Würzburg biologist investigated the role of p38 in the fruit fly Drosophila melanogaster. The insect is a suitable candidate because many of its brain and nerve functions are similar to those of humans – even though it has only around 80,000 neurons, which is much less than humans who have approximately 100 billion. Moreover, Drosophila is comparatively easy to manipulate genetically, allowing researches to selectively disable single proteins, for example, to study the effects.

Charlotte Helfrich-Förster and her team used the same approach for the present study. In a first step, they used immunohistochemical methods to investigate whether the enzyme exists in the circadian clock system of fruit flies in the first place. This system is composed of approximately 150 "clock neurons" in the fly's brain divided into nine subgroups. The two known variants of p38 were found to be active in several of these neurons, albeit not in all of them.

In the next phase, the researchers knocked out or overexpressed the two p38 variants in different combinations, i.e. increased their concentration above the usual level, and studied the impact on the behaviour of the flies. Some of the results were as expected; others, however, delivered surprising outcomes.

Impact of the enzyme in the cells of the circadian clock

What the researchers had not expected: "p38 is particularly active in the fruit fly's cells when it is dark. It is inactive during daytime," says Charlotte Helfrich-Förster. Even though the genes responsible for generating the enzymes work throughout the entire day, activation of the enzyme is subject to a time rhythm and light is capable of stopping the activation process completely.

p38 also affects the evening activities of the fly and its 24-hour rhythm. When the scientists reduced the p38 activity in special clock neurons, the flies postponed their active phase in the evening; their 24-hour rhythm extended to more than 25 hours. The same happened after the researchers had increased the p38 concentration, which also came as a surprise, since they had expected just the opposite effect. "There is probably an optimum level of this p38 variant and any variation in whatever direction has the same effect," Charlotte Helfrich-Förster interprets the finding.

The link between the stress system and the circadian clock

"These results allow the conclusion that the p38 mitogen-activated protein kinase is a crucial component of the circadian clock of Drosophila," the researchers sum up the results of their work.

The scientists teamed up with the research group of Thomas Raabe, Professor for Molecular Genetics at the Department of Medical Radiology and Cell Biology of the University of Würzburg, which also participates in the "Insect Timing" collaborative research centre. Together they were even able to show that p38 regulates the clock protein Period, thereby directly influencing the speed of regular molecular changes. "This can explain why the flies postpone their activity and the rhythm extends to 25 hours when manipulating p38," the researchers further say.