The Coelacanth Lives a Monogamous Life

Scientists have succeeded for the first time in genetically examining the offspring of pregnant coelacanth females. The results show that the young in a brood – in contrast to many other species of fish – are very likely to have all the same father. 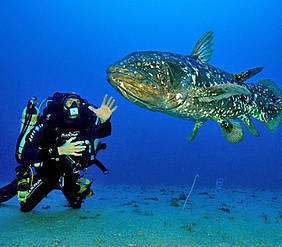 Until 23 December 1938, scientists were convinced that the coelacanth had been extinct for more than 60 million years. Only a few fossilized imprints bore witness to the former existence of these animals – more than 300 million years ago. This was proven wrong on that day: Fishermen, trawling off the coast of South Africa, discovered a gray-blue fish in their net, which was 1.5 meters long and weighed 52 kilograms: the first live specimen of a coelacanth. 14 years later, a second specimen was caught a good 3000 kilometers away from the place of the first sighting, off the Comoro Islands and to the north of Madagascar. Since then, slightly more than 300 specimens have been found there.

Scientists have now succeeded for the first time in genetically examining the offspring of two pregnant coelacanth females. The research was led by Professor Manfred Schartl, chair of the Department for Physiological Chemistry at the Biocenter of the University of Würzburg, and his former associate, Kathrin P. Lampert, who currently conducts research at the University of Bochum. The results of their study are published in the journal Nature Communications.

The researchers relied on a method which is also used in humans, among other things, to determine paternity: the so-called microsatellite analysis. Microsatellites are short DNA sequences, consisting of only a few building blocks, which are typically repeated up to 50 times. Generally, they do not carry any genetic information, but they are passed on by both parents.

"Since we know the genotype of the mother, we were able to show clearly by means of the microsatellite analysis that the entire coelacanth offspring in each brood is fathered by one single male," as Manfred Schartl summarizes the key results of the study. This indicates that coelacanth females are monogamous – at least temporarily. In fact, the team was even able to reconstruct the "hypothetical genotype" of the two respective fathers, although the corresponding specimens were not found among the animals accidentally caught and genetically analyzed to date.

In many fish species, the fertilization of the eggs takes place outside the maternal body. The female deposits the eggs at a calm spot in the water; then the male – or possibly several males – add their sperm. The offspring then develops without parental protection in the water. The coelacanth takes a different approach: "Coelacanths are live-bearers. This means that the young fish are fully developed at birth, having grown within the body of the mother," explains Schartl. The scientists estimate that the "pregnancy" in coelacanths lasts about three years.

One single father for each brood

To obtain tissue samples of a coelacanth female and its entire brood is difficult and rarely achieved. This was made possible by scientists working at the Geomar Research Center in Kiel and Tutzing, who have been researching the coelacanth for several years.

Thus, the researchers were able to examine two specimens of pregnant coelacanth females. Both animals were due to give birth shortly. One female, which was accidentally caught by a fish trawler off the coast of Mozambique, carried 26 embryos and the other, which got entangled near Zanzibar in a net designed to capture sharks, carried 23.

The researchers performed a genetic analysis on these animals, comparing 14 characteristic sites of the genome with each other. They found only minor differences and numerous similarities. "This allows the conclusion that each brood is sired by a single father," says Schartl.

Speculating about the reproductive behavior

However, the scientists are still puzzled as to how the coelacanths perform the sexual act. After all, the animals do not possess any visible external sex organs. Another topic for further studies arises from the fact that each female only mates with one male. "Females generally have an interest in producing offspring with optimal survival chances in the largest possible number," says Schartl. For this purpose, it is a promising strategy to mate with several males. This increases the chances of successful fertilization, ensures a high genetic variability of the offspring and makes it possible to pass on the best genes.

Why females do not mate with multiple males

So far, scientists can only speculate on the reason why the coelacanth does not pursue this strategy. It is possible that the benefits of multiple mating do not outweigh the costs for the female. The "costs" include the elevated expenditure of energy invested in searching for additional males, the risk of falling prey to predators, and an increased risk of infection.

The researchers came across another interesting detail in the genome of the coelacanth offspring: "The father and mother of a brood were not more closely related than the majority of random pairs of a coelacanth population," explains Manfred Schartl. This might indicate that the females avoid mating with close relatives. Or it might mean that other features are decisive for mate choice, such as size, physical constitution or resistance to parasites. "But it is also possible that the coelacanth does not have the ability to recognize relatedness," says Schartl.

The coelacanth – a living fossil

Coelacanths are often referred to as "living fossils". Today's specimens bear a close resemblance to the fossilized imprints of their ancestors, which lived more than 300 million years ago. During evolution, their genes changed significantly slower than in other organisms. Therefore, the study of the coelacanth genome provides a unique insight into the workings of evolution.

Furthermore, the coelacanth is genealogically close to the evolutionary transition from fish to terrestrial vertebrates. It is a close relative of the fish species that is considered to be the ancestor of amphibians, reptiles, the later-emerging birds and eventually of mammals. This was shown only a few months ago by an international research team, in which Manfred Schartl participated.

In a two-year-long project, the global network of scientists decoded the genome of the coelacanth and compared it to the gene sets of other organisms. Among other things, the researchers wanted to answer the following question: Which fish species still living today is the closest relative to the fish that first left the water and crawled onto land some 400 million years ago? There were two candidates, the coelacanth and the lungfish.

The result of the analysis was clear: The closest relative to the first animal to walk on land is the lung fish rather than the coelacanth.