It is a well-known fact that organic solar cells can convert light into electricity. What has been puzzling scientists – at least from a physicist’s point of view – is how exactly this is done. Researchers at the University of Würzburg have now succeeded in clarifying the process. A report on their work has been published in the scientific journal “Physical Review Letter”. 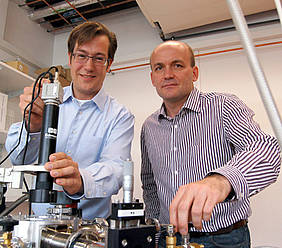 The general principal of an organic solar cell is actually not very complicated. In very simple terms, the cell functions as follows: Between two “current collectors”, two substances are placed that are no more mixable than water and oil. One of these substances – typically a polymer – emits electrons when it is subjected to light. The other one – usually a so-called fullerene, i.e. a carbon structure in the configuration of a sphere – accepts the electrons and carries them to the respective collector, the cathode. An electric current is induced. This in short is the principle, which of course also works in practice.

The charge separation only works under specific conditions

“Yes, organic solar cells do work,” says Vladimir Dyakonov, adding immediately: “But they shouldn’t in view of the established physical theory.” Dyakonov holds the chair for Experimental Physics 6 at the University of Würzburg. For more than a decade now, he has been researching these light-to-current converters, which – in contrast to the well-known modules on rooftops – are not silicon-based, but use organic substances instead. In his studies, Dyakonov also considered the question as to which physical processes make the flow of electric current possible. Together with his research assistant Carsten Deibel, he has now found an answer to this question.

“According to the established laws of physics, the light-induced positive and negative charges, which always occur in pairs, are very difficult to separate due to their mutual attraction,” explains Dyakonov. The concept that light virtually kicks out electrons from an atom or molecule is not quite accurate. What the light absorption of the polymer really involves is the creation of the so-called “excitons”. The electron cloud surrounding the molecule reconfigures and charge shift reactions take place. This process is described by physicists as the formation of a “strongly bound electron hole pair”. How the electron is able to finally disengage from this bound state has been looked into by Carsten Deibel.

The model must correspond to practice

By means of quantum efficiency measurements and photoluminescence spectroscopy, he examined the layers of organic material in the solar cells, which are 20 to 30 nanometers thick (a nanometer is one millionth of a millimeter), determining the energy required for charge separation. Together with his diploma candidate Thomas Strobel, he then simulated in various computer models the complex movements of the charge pairs in polymer-fullerene solar cells and managed to find conditions under which the calculated result corresponds to the findings from experimental practice.

“The process does not work unless the polymer has a certain minimum length,” explains Deibel. Only then is it possible for the electron to separate at the interface to the fullerene so that it can move along the carbon spheres to the cathode. The positively charged rest of the exciton remains polymer-bound, gliding along the polymer chains to the anode. “We can demonstrate that a charge carrier located at a polymer chain segment is the less attracted to the opposite charge, the longer the respective segment is,” says Vladimir Dyakonov. Furthermore, the charge carriers are much more mobile along the polymer chains in long segments than they are in short ones. Together, these two effects allow a very efficient separation of the charge pairs.

On the lockout for efficient materials

Indeed, Deibel’s simulations show a tenfold improvement of the photoelectric current if the length of the polymer chain segments is increased from one to ten nanometers. Ten nanometers is the typical length of the polymer semiconductors currently used in organic photovoltaics. “This means that our research results explain why today’s best polymer-fullerene solar cells allow such an efficient conversion from light into electricity,” says Dyakonov.

After solving the mystery why polymer-fullerene solar cells work despite the physical theory, Dyakonov and Deibel are now working on getting a better understanding of the underlying processes. Their objective is to use this knowledge in materials development and to team up with chemists in order to design new polymers that can convert the input light into electricity in a more efficient way.

60 million euros in grants have been made available by the German Federal Ministry of Education and Research (BMBF) for research projects in the field of organic photovoltaics, a further 300 million is to be provided by industry. Among numerous applications, less than two dozens have been deemed worthy of funding – three of them submitted by the University of Würzburg. Dyakonov and Deibel started their work within the project “Impact of contacts and internal interfaces on the macroscopic characteristics of organic solar cells.” Apart from Dyakonov’s department, the Department for Experimental Physics 2 (Professor Friedrich Reinert) and the Bavarian Center for Applied Energy Research (ZAE), which works in close collaboration with Dyakonov, are also involved in this research. The scientists have been awarded a research grant of 1.4 million euros for this project, which is to be implemented from 2009 to 2012.

The advantages of organic solar cells It is true that organic solar cells are still not nearly as efficient in converting sunlight into electricity as their silicon-based competitors. While the latter reach an efficiency of about 30 percent, the efficiency of organic cells lies slightly below six percent. However, their strong points can be found elsewhere: Since the cells can be made transparent, they are suited for application in buildings, where they can be used to let light pass through while at the same time producing electricity. Due to their flexibility, they are ideal for mobile use, e.g. on backpacks thus enabled to recharge cell phone batteries. What’s more, the production of organic solar cells is relatively easy. Basically, you can use standard printing machines for applying these substances to a cheap carrier material in much the same way as color is applied to large paper rolls. The production costs for this are relatively low. Therefore, organic solar cells are, as Vladimir Dyakonov puts it, “promising candidates for efficient, low-priced photovoltaic devices.”