Ventricular fibrillation, loss of consciousness and death in seemingly healthy people: These are the characteristics of the so-called Brugada syndrome. In the search for the causes of this disease, an international team of scientists has now discovered a surprising fact. 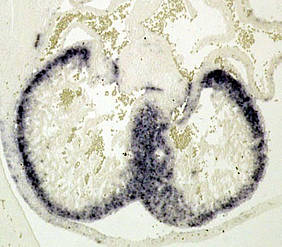 A gene known to be essential in the formation of the interventricular septum and of the cardiac valves can be responsible for the development of the Brugada syndrome.

This is the main result of a study recently published in the journal Nature Genetics by the research group of Amsterdam cardiologist Connie R. Bezzina. The study also involved scientists at the Biocenter of the University of Würzburg: Professor Manfred Gessler, head of the Department for Developmental Biochemistry, and his team have been studying the respective gene, the Hey2 gene, for a long time.

Gessler and his associates identified the Hey2 gene more than ten years ago. In their studies, they were also able to show in an animal model that the gene plays a significant role in the formation of the interventricular septum and of the cardiac valves. "However, the fact that the gene is involved in the electrical activity of the cardiac muscle and conduction cells has not been shown before," says Gessler.

The Brugada syndrome has been recognized for only just about 20 years as a distinct genetic arrhythmia of the heart. It was first described in 1991 by two brothers, Josep and Pedro Brugada. Patients suffering from this disease are affected by an abnormal electrical conduction in the heart associated with a high risk of sudden cardiac death. They are subject to recurrent cardiac arrhythmias, which can lead to loss of consciousness. In the worst case, ventricular fibrillation occurs when the ventricles of the heart contract so rapidly that they cease to pump the blood effectively, which results in cardiovascular failure.

"Previously, it was known that about 20 percent of the patients have defects in the sodium ion channel of the cardiac cells, predominantly in the subunit encoded by the SNC5A gene. However, the causes of the disease remained unclear in the majority of cases," says Manfred Gessler.

In the search for further risk factors, the study group of Connie R. Bezzina first conducted genome-wide association studies, involving more than 1000 patients. As expected, they found that the disease is correlated with certain genetic variants of the SCN5A gene and of the related SCN10A gene, which both have a function in cardiac excitation propagation. The scientists confirmed this finding in further patient cohorts.

To the researchers’ surprise, however, the first analysis also revealed statistically significant data indicating that genetic variations near the HEY2 gene play a role in the development of the Brugada syndrome. These results were confirmed in additional patient cohorts as well.

Defects in the Hey2 gene identified

In a joint project with the Amsterdam study group, the Würzburg researchers then achieved a major breakthrough: "With the help of special optical methods, we were able to establish that mice lacking one of the two copies of the Hey2 gene also exhibit detectable changes to the ventricular excitation propagation and the subsequent repolarization of the cardiac muscle cells comparable to those of the Brugada syndrome," Gessler explains. Hence, the HEY2 gene, previously only linked to developmental defects of the heart, also seems to have an impact on the correct formation of the cardiac conduction system and the electrical excitability of the cardiac muscle cells.

Further studies are already in progress in order to shed more light on the molecular mechanisms of this defect.