It is a popular aquarium fish: the platyfish, Xiphophorus maculatus. It is valued by researchers as an important model organism in the search for genetic trigger factors of skin cancer. Together with colleagues from the USA, University of Würzburg biochemist Manfred Schartl has decoded the genome of this fish species. 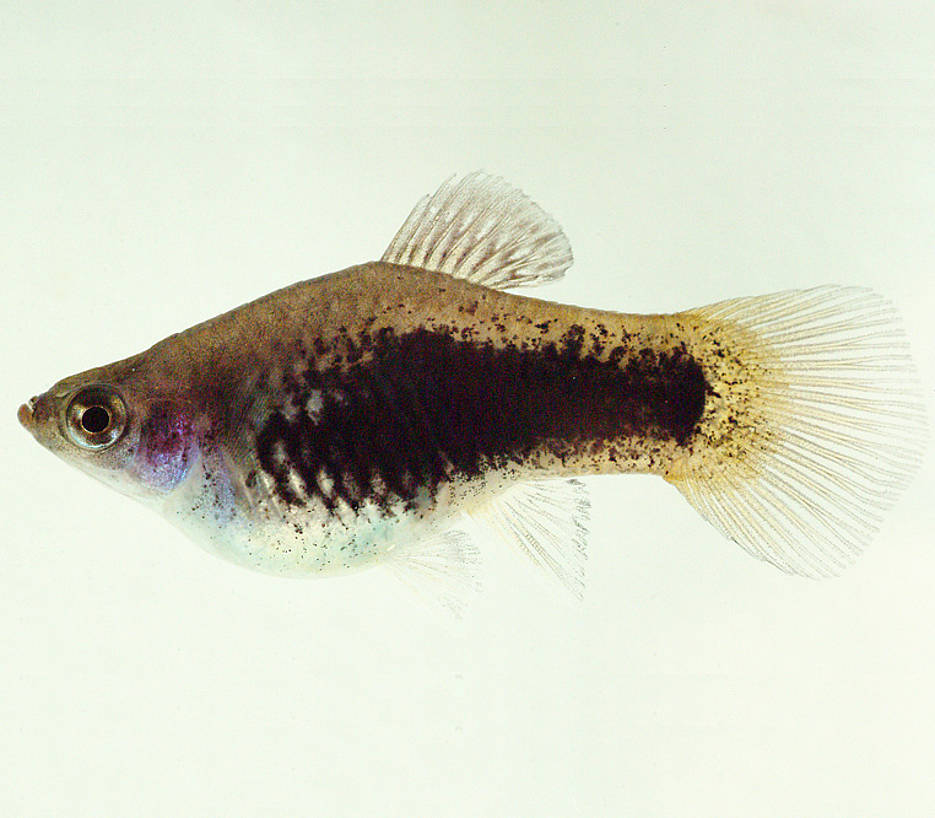 It varies in color from cornflower blue to orange, red or silver with a broad range of color patterns. The platyfish, also known as platy, is one of the most popular species of aquarium fish today. Besides its striking coloration, it has another characteristic: While the females of most fish species lay eggs, which are fertilized afterwards, the platy species is a livebearer. It can give birth to up to 100 young at a time.

An animal model of skin cancer

The fish species Xiphophorus maculatus is of interest to scientists for another reason: If you cross certain strains of this species with each other, their progeny always develops skin tumors. Due to the cross-breeding, the finely adjusted regulatory system of genes gets out of control, leading to the formation of cancer. The tumors produced in this way correspond to malignant melanoma in humans.

A few years ago, Manfred Schartl identified one of these oncogenes and described its properties. Together with researchers from Washington University St. Louis and Texas State University/USA, the head of the Department for Physiological Chemistry at the Biocenter of the University of Würzburg has now deciphered the complete genome of this fish species. The research is published in the current issue of the journal Nature Genetics.

"With our knowledge of the genome, we can now trace the participation and interplay of individual genes in the development of skin cancer. Even in the initial analysis, we have found several interesting candidates," says Schartl. This knowledge about the fish can be readily applied to humans: "The very genes that trigger skin cancer in human pigment cells are responsible for the development of melanoma in Xiphophorus," the geneticist explains.

The research team identified 20,000 genes in the genome of Xiphophorus – about as many as are contained in the human genome. The comparison with related species of fish brought some surprises.

Like many other fish species, Xiphophorus exhibits complex behavioral patterns, e.g. with regard to the courtship of females, parental care of offspring, foraging and fighting behavior or the avoidance of threats. With respect to behavioral complexity, the fish greatly surpass the other so-called lower vertebrates, such as frogs, salamanders, snakes, turtles and lizards – although the latter are much more closely related to birds and mammals in the evolutionary tree.

Why this is the case remained a mystery for a long time. A possible explanation can be found in the genes that are associated with perception and cognition. Klaus-Peter Lesch, the head of the Department for Molecular Psychiatry at the University of Würzburg, has studied such genes in humans and in laboratory mice for several years. Schartl and Lesch found that many of the genes responsible for these areas exist in the platyfish as well.

This finding led the researchers to analyze the genomes of other fish in this respect as well. "To our surprise, we discovered that many of these genes do not only exist as a single copy in the genome of the fish as is the case in terrestrial vertebrates, but even in duplicate," says Schartl. They are relics of a whole genome duplication event in an ancestor of today's modern fish. According to the scientists, the additional second copy is now free to take on new responsibilities in brain function. Thus, the fish had a larger set of tools available for the development of complex behavioral patterns as compared to other vertebrates.

The fact that Xiphophorus females give birth to live young was also of interest to the scientists. When they compared the fish genome with that of mice and other mammals in this respect, they came across a series of further surprises: Although the trait of giving birth to live young developed in mammals and fish independently in the course of evolution, you can find identical genes in their genome.

It is true that the genes important for placenta function, yolk formation or ovum maturation exhibit "unique molecular changes", but they also possess commonalities in the molecular detail. "If the same biological characteristics evolve completely independently of each other, this obviously requires the same or at least very similar changes down to the molecular level of proteins and genes," says Schartl.

The genome is the "blueprint" of life. The sequencing of the platyfish genome provides cancer researchers, ethologists and all biologists interested in this organism with new opportunities to better understand the genes and their complex interactions in many important biological processes or in cancer development.