Strokes are less damaging if certain immune cells are absent in the blood. This previously unknown mechanism will be presented by researchers from the University of Würzburg in the science journal “Blood”. 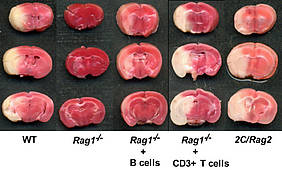 Someone in Germany suffers a stroke every two minutes. The cause is usually a blockage in the blood vessels that supply the brain. Anyone who survives a stroke may sustain severe disabilities, such as impaired speech or paralyses; the reason being that the brain is damaged because it was deprived of sufficient blood for too long.

The blood vessels tend to be blocked by clotted blood. Dissolving these clots or stopping them from occurring in the first place is the primary objective in the treatment and prevention of strokes.

Consequently, the search for new and better therapies starts where the cause of the illness lies: with the blood coagulation that leads to the formation of clots. The Würzburg scientists were all the more astonished, then, when they made a discovery elsewhere – the T cells of the immune system also play a role in strokes. These are actually the cells responsible for combating pathogens.

T cells have a damaging effect

What exactly did the researchers discover? Mice with no T cells due to a genetic defect suffer less severe strokes than their normal fellow mice. What is more, they develop fewer symptoms of neurological deficiencies, such as paralyses, after a stroke. This means that T cells have a negative effect on the progression of a stroke. This has been proven by the working groups of Guido Stoll, Christoph Kleinschnitz, and Heinz Wiendl from the university’s Department of Neurology together with Bernhard Nieswandt from the Rudolf Virchow Center for Experimental Biomedicine.

“The fact that T cells have such a damaging effect in the case of acute strokes came as a complete surprise to us,” reports Christoph Kleinschnitz. The adverse effect can be traced back to two sub-groups of immune cells, the so-called CD4- and CD8-positive T helper cells.

But do the T cells intensify a stroke? The Würzburg scientists were able to rule out two possible mechanisms in their experiments. Firstly, the T cells do not promote the agglutination of the blood platelets or, therefore, the formation of blood clots. “Secondly, they do not fuel the process either in the form of a specific immune reaction,” says neuroimmunologist Heinz Wiendl. Further research is now needed to clarify how the T cells exercise their damaging effect.

The Würzburg researchers hope that their work will help improve stroke therapy for humans. If the findings can be transferred to people, it might be possible to devise new approaches by purposefully manipulating the T cells. It is conceivable, for example, that in the early stages of a stroke the harmful fraction of the T cells may be deactivated temporarily to thereby reduce the symptoms of deficiencies. “But further studies are needed before we reach that point,” says neurologist Guido Stoll.

These research findings have been made in the Würzburg collaborative research centers 688 and 581. Both are funded by the German Research Foundation (DFG). The results now are published in the online issue of Blood, the Journal of the American Society of Hematology.